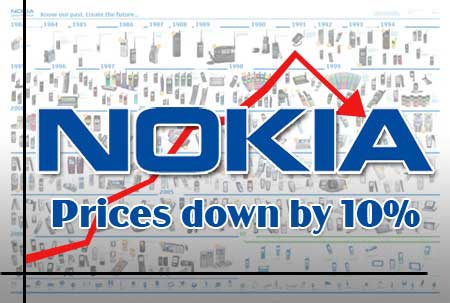 Nokia has made a major unexpected move to give a tough competition to other mobile titans in the market. Nokia has slashed down the prices of selected handsets’ the prices have been cut by as much as 10 percent! And what is even more surprising is that the selected handsets that have had their prices cut down belong to the music and multimedia handset category. Now isn’t this a great news for Nokia loyalists?

Lately, the 3G iPhone from Apple has caught a lot of attention in the market, while Motorola and Sony Ericsson have been rolling out music and multimedia phones, focusing on cameras and music quality. Apparently, Nokia has a 39.9 percent of share in the world mobile phone market and is currently ruling the roost. However Nokia’s decision to slash down the prices might just bring back the lost spotlight on the brand. The price cut has been regarded as the steepest Nokia would go on its handsets’ prices.

As far as the pricing tactics go, “Nokia has always been extremely tactical with its pricing, pinpointing sweet spots in different segments of the market and making adjustments to wrongfoot competitors,” said Ben Wood, research director at CCS Insight to SignOnSandiego.com.

However, David Hallden, analyst at Cheuvreux has a different take on this. “This is basically a way to run away from competition. You’re putting a lot of pressure on your less competitive peers. I think they’re doing a ‘Crazy Ivan,” he says, comparing Nokia’s move to that of a submarine’s.

Crazy or not, this is definitely just too good for any mobile phone consumer. Even the Nokia loyalists who might be thinking of turning to another brand for a change may rethink about their decision.