Nokia’s RX-114 Windows tablet has hit the rumor mill for a second time. While its first appearance gave us a brief insight on what we could expect in terms of hardware, the latest leak has brought forth the possibility of Nokia unveiling the slate at an event during late September. And based on a report, it will take place in New York City.

Windows Phone Central has managed to get their hands on a screenshot of the event registration page. However, it shows no confirmation on whether the company indeed plans on launching the RX-114 Windows tablet. According to the report, the Finnish giant normally conducts major product launches in New York City and it’s said to have implemented a quarterly launch approach which somewhat gives credence to this leak. Where specifications are concerned, GFXBench indicated that the Nokia RX-114 Windows tablet will pack a Snapdragon 800 SOC, Adreno 330 graphics and a 1371 x 771p display with Windows 8 (not RT) running the show. 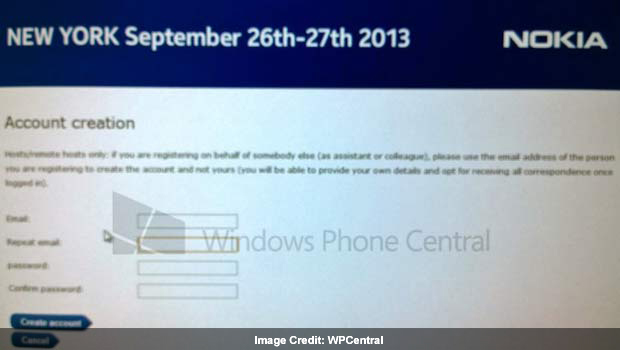 The RX-114 isn’t the only Windows tablet that has been rumored to arrive from a smartphone-centric manufacturer. HTC is expected to announce the R7 and R12 slates sometime during this quarter. These devices will cater to the 7-inch and 12-inch segments, respectively. Additionally, they’re also speculated to arrive with Qualcomm Snapdragon 800 processors on the inside, clocked at 2.3GHz in this case, 2GB of RAM and 16GB of storage. The latter will sport a 13MP camera as well as a high resolution 2048 x 1536-pixel display.

We can only speculate that the RX-114 will show up at an event on September 26 or the 27th, so make sure to have that extra large pinch of salt at hand. The Finnish manufacturer is also expected to roll out a phablet by the end of this year. The report notes that prototypes of the large handset are currently being tested.