The Nokia RX-114 Windows tablet is definitely in the works and most of its specifications have been leaked on the web via GFXBenchmark results. We wonder why Nokia is designing a slate based on the platform that has failed to impress users. It looks like Microsoft is hoping that its Windows 8.1 RTM will hit it off with customers and that could be the reason why the software maker has joined hands with the Finnish company to come up with a device running this platform.

Let’s take a look at the specifications of the Nokia RX-114 that came to light via the benchmark results and was spotted by the guys over at Nokiapoweruser. The slate is apparently powered by the quad core Qualcomm Snapdragon 800 processor that is accompanied by the Adreno 330 GPU. As for the screen resolution of the gadget in question, we have learnt that it boasts of 1371 x 771 pixels. The source of this news has revealed that the screen of the upcoming gadget will be similar to that of the Surface Pro and RT tablets. 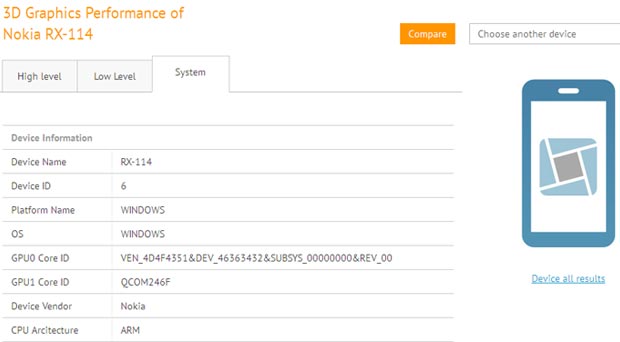 If earlier speculations by Adduplex are to be believed, another tablet, apart from the Nokia RX-114 is in the making. It is codenamed RX-108 and may be a variant of the concerned device featuring a different screen size. According to the aforementioned website, the Nokia RX-114 has been delayed so it can match the schedule of Microsoft’s Windows 8.1 RTM OS.

As the benchmark results of the RX-114 tab have been leaked, it is most likely to be on the cards. What remains to be seen is when exactly the company decides to go on record to confirm the slate and introduce it to us in person.