Nokia, the Finnish mobile giant released a new Nokia Supernova range that can be personalised, for consumers to express their style since everyone is unique! 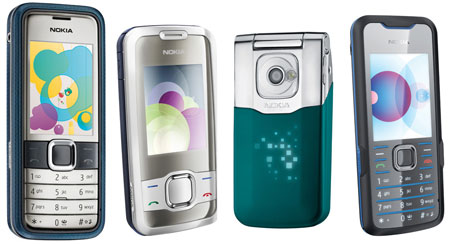 The four new handsets – Nokia 7610, 7510, 7310 and 7210 in the Supernova range seem to be quite cool as they are not only the feature packed Nokia handsets providing you the best of functions but also because you can add a touch of your own style with the help of their exchangeable covers. Just go about matching them with your clutches, handbags, goggles, anything and make a new fashion statement. Since fashion is becoming a large part of our day-to-day life, the phones are designed in a way that people can extend their personal style to their phones.

“As we rely more heavily on mobile phones to stay connected, they increasingly know everything about us and have become a window into our worlds,” said Jo Harlow, vice president, LIVE category, Nokia. “With the Supernova range, we set out to give people the ability to set themselves apart in the same way that they would with a traditional statement accessory.”

The Nokia 7610 Supernova is the slider with smooth curves, that is available with Xpress-On covers available in the ‘steel blue’ and ‘red’ colours and featuring the ‘Theme Colourizer’ that enables user to identify and capture any colour and modify the look of the phone’s theme by using the captured colour not only in the theme but also for the illumination of the keys!

Other features of the 7610 Supernova phone include:

The Nokia 7610 phone is priced at 225 EUR before taxes and subsidies. The phone will be made available in the third quarter of 2008.

The Nokia 7510 Supernova phone has a fold design with a push-to-open side key. It is available in the colours of storm blue, red and emerald green and espresso brown with Xpress-On front and back.

The other features of the Nokia 7510 Supernova include:

Nokia 7510 phone costs 180 EUR before taxes and subsidies. It will be made available in the fourth quarter of 2008.

The slim and sleek Nokia 7310 Supernova too comes with the exchangeable Xpress-On covers that are etched with bold 3D textured designs. It is available in the colours of ‘steel blue’ with an addition of a second front and back cover in ‘wasabi green’ or ‘candy pink’. There are five colour options for front and back cover – ‘mushroom silver’, ‘plum jam’, ‘electric blue’, ‘yellow mellow’ and ‘espresso brown’. These will be available across select markets only.

Nokia 7310 phone will cost 155 EUR before taxes and subsidies. The phone will be made available in the second quarter of 2008.

Nokia 7210 Supernova is trendy, sleek handset available in the colours of ‘bubble gum pink’ and ‘vivid blue’ in a gloss finish.