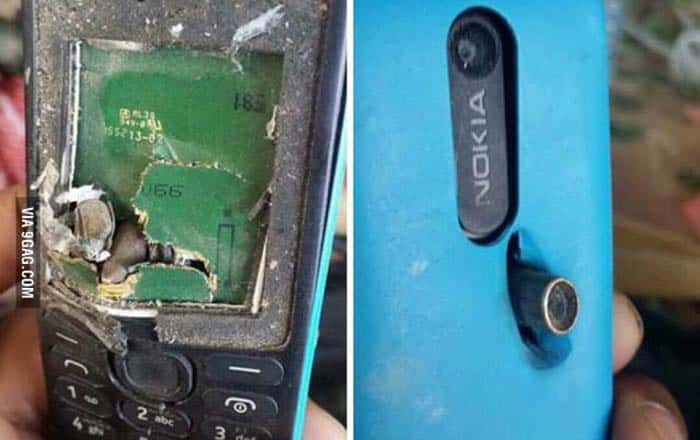 Nokia phones have long cultivated an image of being indestructible and reliable, especially back in the golden days of its dominance in the industry. This reputation has now been further cemented with the emergence of news that one of the brand’s phones stopped a bullet in its tracks and saved a man’s life.

Details about the incident itself are currently hard to come by. Microsoft General Manager of Core UX for Windows Desktop, Tablet and Phone Peter Skillman first highlighted the event via his Twitter account, talking about how he had worked on the Nokia device in question.

According to Skillman, the Nokia 301 saved a person’s life in Afghanistan last week. He also uploaded a photo alongside the tweet showcasing the feature phone with a bullet embedded inside it. The pellet expectedly destroyed the handset, but that’s a small price to pay for the safety of having a mini bulletproof vest on.

This isn’t the first time a Nokia phone reportedly saved someone’s life. Back in 2014, a Lumia 520 prevented a bullet from killing a Brazilian police officer. It naturally didn’t survive the ordeal, though the case did prove to a certain extent that even the brand’s smartphones are tough.

This will hopefully be the case with Nokia’s highly-anticipated Android phones as well. The company is expected to launch a couple of handsets and a tablet by the end of Q4 2016 or early Q1 2017. Two of these are expected to be high-end products and one may be a mid-range offering.