Nokia is pegged to cave in to the immense market popularity of the Android, and release its first phone powered by Google’s open source OS soon in the form of the handset codenamed Normandy which we’ve seen in numerous leaks. Lots of new details about the purported handset have emerged through two fresh leaked images.

First among them has come via secret Twitter account @evleaks, and it showcases the various colors in which the Nokia Normandy is to be made available apparently. But above all, it gives us a glimpse of the homescreen which this device will bear. As can be seen in the image, the user interface is clearly reminiscent of Windows Phone handsets.

Former speculation regarding the Nokia Normandy possessing dual SIM card slots gets cleared up when you glance at its status bar. The same fact is also highlighted in the image posted below. This one comes from a Weibo account, and also displays the phone’s app drawer which is divided into various sections. 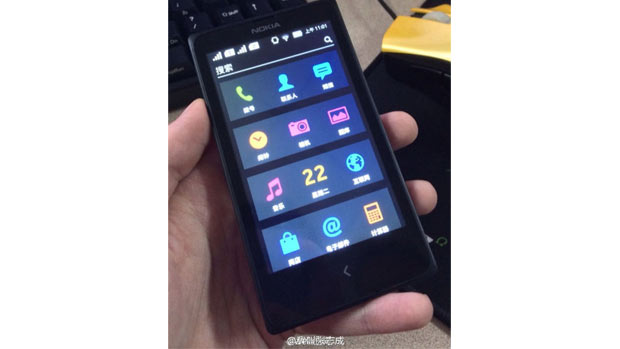 For a quick refresher to those unfamiliar with the supposed Nokia Normandy, here’s what we know so far. It’s a device which is said to run a highly tweaked version of the Android 4.4.1 KitKat OS and carry a Qualcomm Snapdragon 200 SoC. A 4-inch FWVGA display and a 5MP camera have also been speculated to form part of its attributes.

Next month’s MWC 2014 event in Barcelona is expected to be the stage on which the Nokia Normandy will be unveiled for the first time. Stay tuned for more expected leaks till then.