In spite of there being reports that Nokia has given up on the Android-based Normandy, the device doesn’t shy away from showing up on the internet. Not only have some more of its pictures appeared on the web, but the device has also been benchmarked, the results of which confirm the presence of the Android OS.

The AnTuTu benchmark results of the smartphone appeared on the Chinese website Weibo and the guys over at Nokia Powerusers managed to lay their hands on the screenshots. It is codenamed A110 and operates with the assistance of the Android KitKat 4.4.1. Another detail that has come to light is that the device will make the most of a Qualcomm Snapdragon processor, but the exact version that it will employ has not been mentioned. 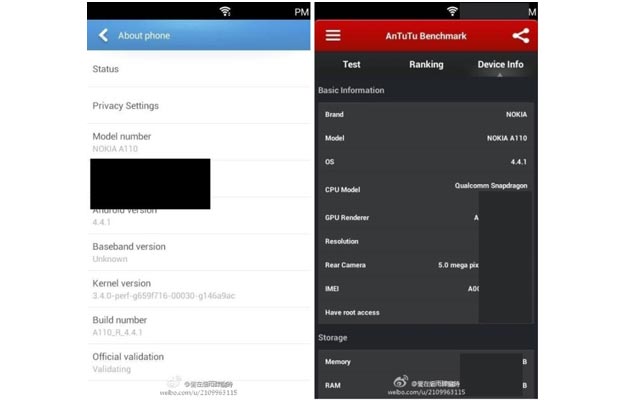 As you can see in the screenshot, the Nokia Normandy will have a rather low-end 5MP camera. This could mean that the phone may not be a very expansive one and may fall in the affordable range of Android smartphones. It is likely to be capable of rendering visuals in 854 x 480p resolution.

And that’s not all. The serial leaker @evleaks has also found some more pictures of the phone and they clearly suggest that the phone will have dual SIM card slots. The lack of Live Tiles and presence of widgets are enough to give the operating system away. Interested users are also likely to have multiple color options for this handset.

The Nokia Normandy may show up at the MWC to be held in February.