Nokia N8 Review: A blend of superior features covered in a chic drape 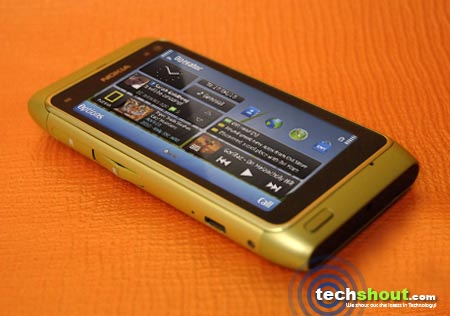 In an attempt to showcase its proficiency in the high-end segment, Nokia recently flagged off the Symbian ^3 range of devices. One of the members in this family dubbed the Nokia N8 is now on our review table and we’ve been endeavoring to decipher whether this handset will help the company fortify its position. Read on to know if this innovation manages to engrave Nokia’s imprint strongly on the land or does it crumble like the muscles of an old lion. As metropolitan cities have transformed into concrete jungles, the wild battle from dark woods persistently unleashes its face in subtle yet aggressive forms. The fierce and incessant clash in the mobile phone sphere turns up to show just that. If we were to view each of these acclaimed and not-so-celebrated manufacturers as distinct lion prides, they would appear quite similar to those reigning in the rich yet vile Savannah landscape across West Africa. Constantly on their claws to protect and expand their empire’s sovereignty, these giants have been fighting it out hard and fast to prove their prowess.

If you judge anything about a book from its cover, then the enclosure of this smartphone has a lot to say. Unlike the mundane envelopes which ship majority of handsets these days, this one is a unique creation. A squarish blue-colored box with a depth of approximately one-inch, the packet does not go overboard about the device’s features and special highlights. The Nokia N8 occupied the space within alongside modest companions including USB and HDMI cables, Quick Start Guide for Ovi services, User manual, booklet highlighting regulations and voucher for downloading Rihanna’s recent album Rated R. The last bit of the box, a recyclable white folio placed at the bottom as a mat for these offerings, reminded us about all those commercials where the company emphasizes its commitment to the green cause.

While attractively dressed products allure users through their publicity campaigns, some of them turn out to be nothing more than a teaser. However, the Nokia N8 is just the pie which basked luxuriously in the glory of several advertisements. The N8 unit that walked into our work space adorns a glossy olive green swathe throughout the major part of its rectangular construction. The frontal profile of the Nokia N8 phone sports a 3.5-inch AMOLED capacitive touchscreen display which dominates the entire panel, leaving less than half-inch of space on both the ends. Embedded on the right corner of the screen space is the secondary camera for making video calls whereas the menu key has been outfitted in a rectangular slot with rounded edges on the lower left side. An earpiece has been entrenched at the center of the display’s crest while a microphone chips in along the right rim. The rear of the creation wraps around the same silky garb with the words ‘Nokia Nseries’ ingrained in a white hue. The 12MP camera with Carl Zeiss optics and a Xenon flash resides here, stretching out a feature to automatically remove the red-eye flare. It also offers a shed to the built-in loudspeaker and microphone. 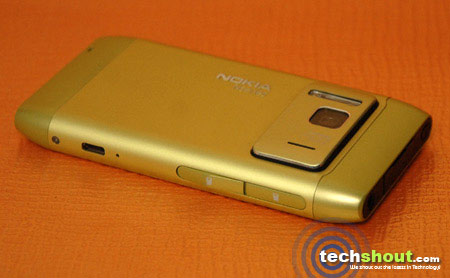 The structure of the N8 handset goes for a smooth, curved twist on its left and right sides which accommodate few ports and buttons. The left bend houses two slots, one each for a SIM card and a memory card, carpeted under rubberized doors alongside a USB port and a tiny charging indicator slot. Photography enthusiasts and music lovers can flip the phone to the other side that boasts of three keys, empowering them to control volume, lock/unlock the screen and take a shortcut into viewing surroundings through the rear camera. Though the design team at Nokia has mainly sculpted the gadget in a rectangular shape, the architecture tapers at ends for extending a curved figure on the peak and base while the upper and lower panes don a flat surface. The former lodges HDMI port, power switch and 3.5mm AV connector whereas the other pole embraces a jack for the battery adapter as well as a wrist strap eyehole.

Turning on the N8 takes no more than few seconds while it is simple to modify factory settings and attune them as per one’s convenience. The embedded User Guide offers information about every aspect of the phone. Whether you wish to learn about the connectivity attributes or customize the handset better, it serves like an old man’s guide along the route. While navigating through varied folders, the clean presentation and vivid color reproduction on the interface presents a relishing treat. Further, it gives you only three homescreens which can be personalized with your choice of widgets, themes, shortcuts and icons. However, you cannot paint them with different hues as only a single theme or wallpaper will manifest its mark throughout the display. As you flip and toss the device, the accelerometer automatically changes the screen’s orientation from portrait to landscape and vice-versa. This vibe has been further peppered with the touchscreen ability that enables lucid navigation.

The menu of this creation spells out limited options, precisely 12 in number. Of course, you can create folders and add content into these sleeves for a quick or relaxed glance. Nevertheless, the default options include calendar, contacts, music player, web, messaging, photos, Ovi Store, maps, videos, settings, web TV and application. Almost gimmicking the popular App Store, the Ovi service stands out like a departmental store full of applications, games, audio & video and other content. The embedded Social Network option lets you connect with your friends only on Twitter and Facebook. All you need is an Ovi account and it doesn’t take more than five minutes to sign-up for one. Despite the inundation of advanced technology, the manufacturer has finely focused on basic aspects too. The call quality and clarity are brilliant while keying in text is uncomplicated too. Even the battery life turned out to be better than other configurations in the Nokia family. We could easily slip the Nokia N8 it into our pocket for approximately 16 hours on a single charge. 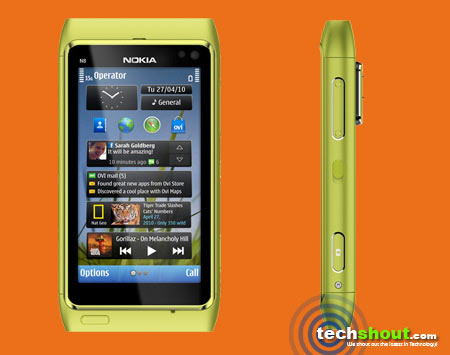 Since it had been a good long time we’d changed our profile picture, the instant photo captured by the 12MP camera seemed the right alternative. The camera’s quality is more than impressive for both still images and videos. While it delivered more than expected, the audio and speaker quality took us by its wind. The volume level is just right through the speaker as well as headphones. More of a fashion accessory than a communication device, the Nokia N8 extends applications such as Ovi Maps which keep you hooked to this innovation. Though this really wouldn’t qualify into anything developed for hardcore gamers, the handset is a good bet for casual gamers. The graphical representation is clear and bright, splashing a balanced imagery supplemented by pleasing audio.

Thanks to the USB-on-the-Go feature, users who keep ferreting with their external storage device can keep transferring content to and from the handset into a flash or pen drive. Further, the conventional USB cord makes it possible for flawless migration of your content into a computing system or vice-versa. The other facet which elevates its stand is the HDMI support, allowing users to directly connect the device with a compatible display system. Be it a sleepover party or an early morning walk with a pal, document your time on the gadget and watch it straight on your TV. Those who are wondering if it is as much fun as it sounds, yes it is.

The touchscreen is smooth and simplifies navigation even through cluttered websites.

Advanced features like USB-on-the-go and HDMI support puts it in the league of distinct products.

The 12MP camera and its picture quality could help you push forward your plans of purchasing a digital camera.

The Social Network feature in Ovi Store has pre-sets for only two SNS namely Facebook and Twitter, leaving out other significant elements of virtual existence.

Due to a limited number of built-in applications, users will have to download several apps through the Ovi Store.

While skimming out a sleek performance, the dynamic communicator envelopes advanced features in a stylish enclosure. Its beauty lies in the fact that the developer has wisely balanced multitude of attributes with a simple yet remarkable design. The visual quality and color reproduction along with the integrated interface blends well with the Dolby Surround sound for rendering a refined experience. Its ability to directly connect an USB drive and the HDMI support surpass the benchmarks set by other devices from the company’s portfolio. However, the restricted number of built-in applications is a letdown. The price tag of Rs. 26,259 tucked in with the handset could seem amplified to some tech fiends. As we pen down our final rating, the Nokia N8 earns itself a rating of 8.5 on 10.