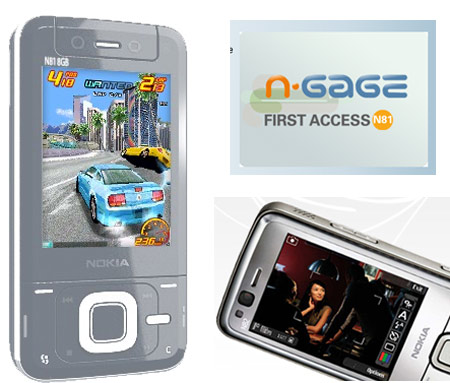 Finnish phone maker Nokia has extended its presence in the mobile Internet arena with the launch of two new Web-based services for mobile phones. The first one is the “N-Gage First Access”, which is an online gaming service, while the second one is called “Share on Ovi”, a social networking Web site.

Both the Share on Ovi and the N-Gage First Access services are a part of Nokia’s newly launched Ovi brand.

In fact, Nokia delayed the much-awaited N-Gage gaming service not once, but twice last year mainly because of delays in software testing.

The Nokia N-Gage First Access service is a free pre-release to the N-Gage gaming application.

Currently, users of Nokia N81 and N81 (8GB) are entitled to download the pre-release version at no cost. However, in the near future, users of N73, N82, N93, N93i, N95, and N95 8GB will be able to download the service. It still remains to be seen whether the users of the above mentioned Nokia phones will have to pay a price for using the service.

Regarding Nokia’s Share on Ovi service; it allows users to share photos and videos with each other. This social networking site will also include access to Nokia services such as Nokia Maps and N-Gage Gaming as well as Nokia’s Ovi music store.

The Share on Ovi site is based on technology created by Twango, a US company that was acquired by Nokia in July 2007.

“First, we are now part of Nokia’s new service brand, “Ovi”. As of Today, the Twango brand will be a fond memory. We are now Share on Ovi. As you can see from looking at the site, we’ve moved to a new look and feel that you will see among all the Ovi services as they roll out” Jim Laurel, Director, Service Development – Nokia.

Nokia will be launching Ovi-compatible handsets that come with one-year of unlimited music downloads bundled with the device itself.

Announced last year, Ovi, which in Finnish means “door”, is the generic brand name of Nokia’s new Internet services which enables consumers to easily access their existing social network, communities and content, as well as acting as a gateway to Nokia services.