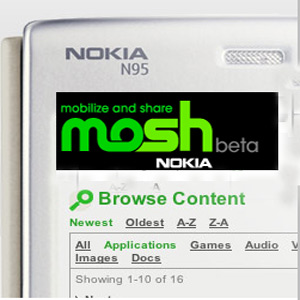 Nokia has unveiled a new service called SEEK, which the company has termed as the third dimension of its mobile sharing site called MOSH. SEEK allows MOSH users to make requests for the content they really need, after which the community can then respond with suggestions or custom created content.

In simple words, SEEK allows the rapidly growing and global community of MOSH to connect with one another to obtain content that is not yet available.

Nokia has called SEEK the third dimension in eth evolution of MOSH. The first dimension was the ability to upload and share content with a global audience and the second dimension was downloading and customizing device.

According to Lee Epting, Vice President, Forum Nokia, “We have always focused on MOSH being a service created for, and shaped by, users. Seeing users request content from one another, as well as the desire for community discussion, forms the foundation of SEEK.”

“With SEEK, the possibilities are endless: mobile scavenger hunts, sponsored SEEK competitions, or collaboration on applications by developers in India, Russia and the USA, we expect this to take creativity and mobile customization to a new level,” he added.

The newly announced SEEK service on Nokia’s MOSH mobile sharing site has been officially scheduled for launch of October 14, 2007.