The Nokia Moneypenny smartphone is making headlines yet again and this time, we have come across a leaked screenshot of the smartphone that goes on to prove that the gadget indeed has dual SIM card slots. This handset was first spotted on the internet back in November and then @evleaks had tweeted that this dual SIM device will be based on the Windows Phone Blue OS.

And once again, the guys from the same source have managed to lay their hands on a picture of the Start screen of the phone. It clearly shows two network bars on the top left-hand side corner and the device seems capable of running at least 3G networks on both SIM cards at the same time. 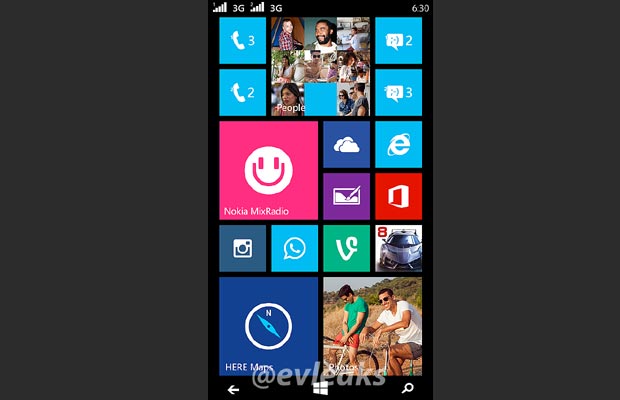 Also, there are two Live Tiles for the phone app as well as two for the messaging application, one each for SIM 1 and SIM 2. This compels us to believe that it could very well be the first Windows Phone handset featuring a pair of SIM card slots. Another thing that sets this phone apart from the already-released Nokia Lumia devices is the position of its buttons. The Moneypenny’s keys are placed on the screen, unlike other handsets which have capacitive back, start and Bing search buttons below the display.

Apart from the Nokia Moneypenny, the serial leaker mentioned above has tweeted a press shot of the Android-based Normandy as well. So does it mean that the Google-certified device is still on the cards? Let’s wait and watch. As of now, the Finnish manufacturer chooses to keep details regarding both the devices close to its chest.