The Nokia Monarch smartphone that has been in the news for a while now, is nothing but the Lumia 635, a version of the Lumia 630. The handset is headed to T-Mobile and will be compatible with the 4G LTE network of the carrier. It goes without saying that it will be exclusive to the network operator in question.

This piece of information regarding the Nokia Lumia 635 codenamed Monarch has been given out by none other than our trusted source of news, @evleaks. Nothing else has been revealed about the phone as yet, but we are expecting it to be exactly similar to the Lumia 630 in terms of features, specifications as well as appearance. 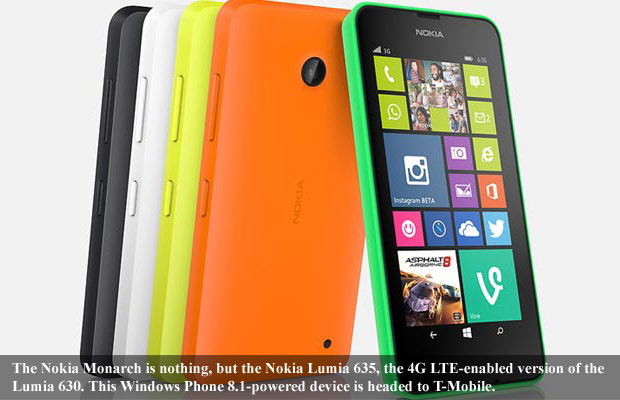 The Nokia Lumia 635 should flaunt a 4.5-inch FWVGA touchscreen just like the 630 and may even play host to a 5MP rear-facing camera. It will be powered by the Windows Phone 8.1 OS and could be fueled by a quad core Qualcomm Snapdragon 400 processor that ticks at 1.2GHz. Some of the other features of the phone include 512MB of RAM, 8GB onboard storage expandable up to 128GB and a 1830mAh battery to name a few.

Also, according to @evleaks, Nokia has a number of devices in the pipeline which have been codenamed Ara, Leo, Moonraker, Onyx, Peridot, Superman, Tesla and Vantage. We will be back with information on these gadgets as soon as we hear something. And as for the Nokia Lumia 635 or the Monarch, it shouldn’t take long to hit the store shelves via T-Mobile in the US.

Here’s a list of the key specs of the Nokia Lumia 630: