If Nokia by Microsoft sounds a bit off-key to you, you had better make yourself used to it, as it seems that’s the branding which all upcoming Lumia devices will be bearing on them. An image which appears to be legit goes on to showcase the rear side on an unreleased smartphone from the Redmond giant, with the lettering on it clearly stating who had purchased whom for over $7 billion last year.

This picture comes from Chinese search engine Baidu (via GSM Arena), and that handset is apparently a successor to the Nokia Lumia 820 which is out of circulation at the moment. If this mid-range device launched back in 2012 is to get a successor, we’re guessing the traditional naming convention will be maintained and it will be called the Lumia 830. 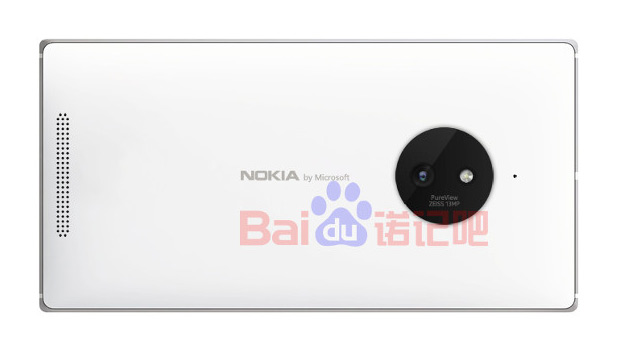 Nokia by Microsoft is a branding that’s probably aimed at letting people know that the Finnish company is now completely in the hands of Microsoft. It could also mean that the Windows-maker is planning to eventually eliminate the Nokia name completely.

The device pictured above which is speculated to be the Lumia 830 is expected to grab mid-range specs which include a 13MP camera with Zeiss optics, as can be seen it the image. It is said to kick in a 4.5-inch display on its front surface, but other details haven’t crept out of the shroud as yet.

If it is indeed the first handset to bear the Nokia by Microsoft branding, this signals a big change for the business of Lumia smartphones.