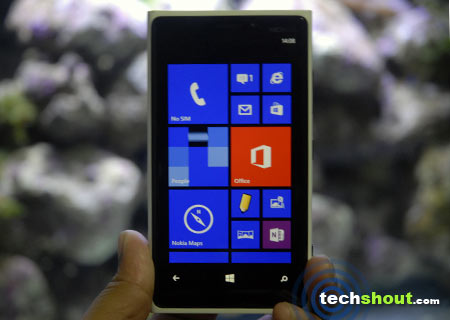 The Nokia Lumia 920 has landed for a review and we’re pretty excited to experience PureView once again, this time through the Windows Phone 8 platform. The 808 was certainly the king of the mobile camera hill when it was launched back in 2012, but it failed to show promise in the smartphone race. That’s mainly why the arrival of the camera technology on Microsoft’s mobile OS has been highly anticipated. Apart from this, the flagship competes against the HTC 8X which not only boasts of a premium design, but also respectable hardware. If you’re wondering how well does the company’s crown jewel stacks up against its rivals, read on because we’ve got a lot to tell you. 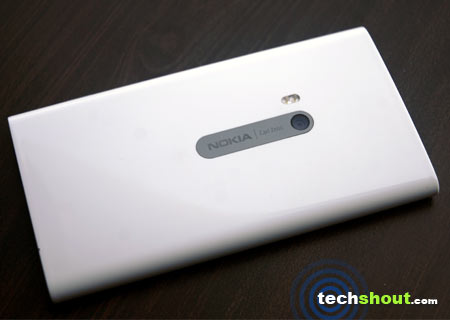 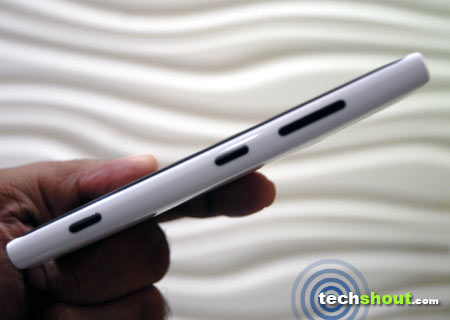 The current generation of Lumia members has taken up a fresh design approach as compared to the previous series. However, the Lumia 920 still possesses quite a similar appearance as compared to its short-lived predecessor, the 900. The handset is the heaviest in the lineup, tipping the scales at 185 grams and it even takes the crown in the entire Windows Phone 8 ecosystem. The device isn’t the slimmest on the block either, measuring 10.7mm thick. In spite of these drawbacks, its streamlined design and stylish appearance won’t have you worrying much about the negatives. Unlike the mid-range 820, the flagship doesn’t have the rounded tips that we fell in love with, but rather, sharp ends for a more rectangular look.

The unibody construction is well thought out. The sides are curved to deliver a comfortable grip and the physical buttons are exactly where you’d want them to be – A finger’s reach away. Similar to the 820, you’ll get a 2-stage capture key for the camera, a power-cum-lock button and volume controls on the right. The bottom plays house to dual speakers and the microUSB port, while aligned on the top are the microphone, 3.5mm audio jack and SIM tray. Flip over to the rear and you’ll be presented with the star of the show, the 8.7MP camera with the accompanying LED flash. Well, Nokia, you could have at least branded this piece of hardware with the PureView moniker somewhere. 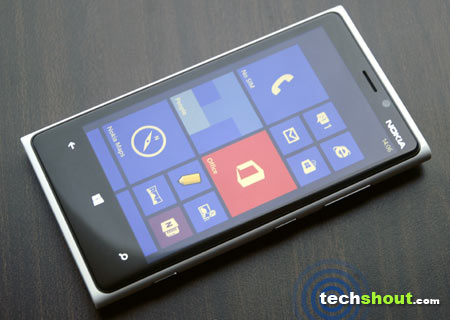 Windows Phone 8 is all about speed. And even if you go for an entry-level option, you’d barely notice any difference in the overall experience. So why opt for an expensive device when you can get it all at half the price? There’s one simple reason – expertise. The company has a few aces up its sleeve when it comes to staying ahead of the competition. It has deployed the Nokia Lumia 920 with some of its best technologies till date, the PureView camera and the PureMotion HD+ display being some of them. And it’s these components that make the most difference at the user end. In-depth details on these perks can be found in the subsections below.

To measure performance in numbers, we’ve given the smartphone the same treatment all previous Windows Phones have received. 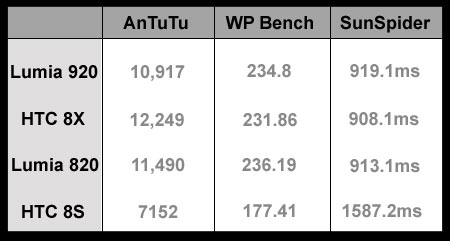 With a score of 919.1ms, SunSpider (here lower is better) has placed it at third position against the 820 and 8X handsets, which is still pretty impressive. Also worth mentioning is that on heavy usage, we noticed the area above the camera heats up a bit, but not so much that you’d need to worry.

Note: Due to certain issues with the AnTuTu suite, we weren’t able to test the graphics as it forced the tool to close on every run. The mentioned score should be at par, if not, higher than that of the 820 and the 8X. 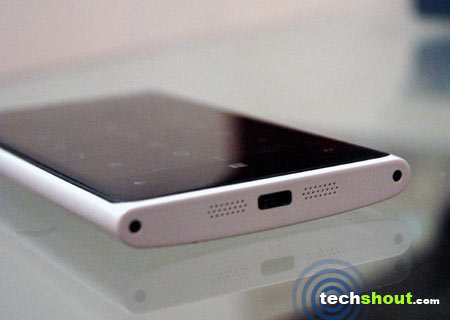 The Lumia 920 has the largest screen in the Lumia series. Running 4.5 inches wide, it isn’t too big, nor is it too small for an unpleasant experience. And we’re quite happy it’s not an AMOLED panel like the one found in the 820. To be frank, we’re not quite the fans of saturated visuals. We’d prefer realistic colors which the IPS LCD screen employed here does a marvelous job of delivering and not to mention, superior viewing angles. The touchscreen is highly responsive and it makes scrolling through the UI buttery smooth. And with super sensitive touch technology, you can pop out the device and use it with gloves on. To top it off, there is the sunlight readability enhancement for better visuals in broad daylight, which works as advertised, by the way. 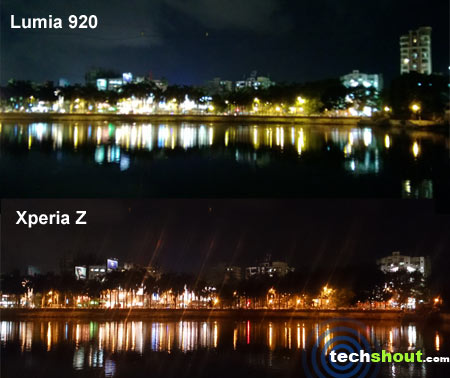 Camera technologies have advanced since the 808’s launch back in 2012 and competitors have started packing their smartphones with high performance shooters. For the Nokia Lumia 920, the company hasn’t brought forth the entire package found in the first PureView device and if you’ve used the 808 before, you’re going to be pretty much disappointed knowing that the camera UI is quite limited when it comes to offering features. But hey, that’s WP8 for you. To test the snapper’s capabilities, we’ve put it up against the Xperia Z that has a 13MP Exmor RS sensor, albeit we did reduce the latter’s resolution down to 9MP for a fair game. 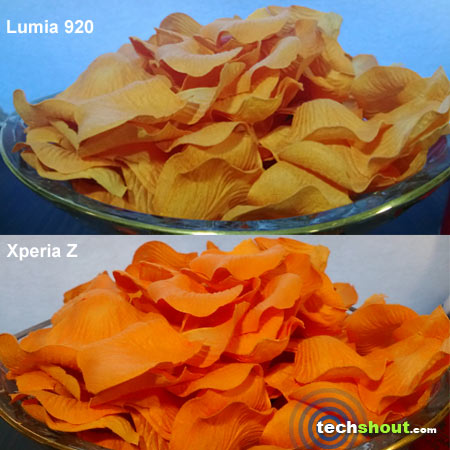 While the Lumia 920 showed good results in most scenarios, the Finnish manufacturer’s flagship gave us mixed responses, basically a hit or miss in the color reproduction section. Refer to the sample images for a clearer picture. Nevertheless, the latter excels in low-light imagery by delivering bright renders even in places where light is scarce. And compared to the former, we noticed a huge reduction in noise, albeit the extra softness in images tends to mess up the level of details. Videos captured in good to moderate lighting look amazing. Vivid colors and a great level of details are present in the recorded footage. However, what it really misses is Rich Recording for stereo quality audio to go with those great visuals.

We’ve almost hit the end of our Nokia Lumia 920 review, but there’s still something left to discuss – The battery life. With a capacity of 2000mAh, the Li-ion power pack has managed to deliver over 4 hours of intense gaming on a single charge with a battery drain of around 25% every half hour. Online video streaming via YouTube was a bit disappointing as well, with a recorded time of just 4.5 hours of playback. Our last test was conducted on WP Bench which rendered a rundown time of 2.22 hours. During testing, the phone was on Wi-Fi at all times and connected to an HSPA+ network.

The low-light performance of the PureView camera is truly jaw-dropping and video capture at 1080p is very much enjoyable.

The PureMotion HD+ panel is a feast to the eyes by proffering crisp and realistic visuals.

While the snapper does justice in low-light conditions by delivering bright pictures, it falls short in capturing fuzz-free images in broad daylight.

Don’t you think 185 grams is a bit over the limit for a modern smartphone, not to mention a flagship?

We’ve said this multiple times before and we’re reminding you again – The general experience is basically the same in all WP8 devices. If you don’t mind lugging around 185 grams of smartphone, then the Nokia Lumia 920 makes an ideal pick in the ecosystem. It’s high on performance, has a beautiful display and the camera is amongst the best in its class. Where price is concerned, potential buyers in the US can get hold of the phone on-contract for $99.99 and above, while customers in India will have to shell out Rs 36,999 for the unlocked version. We’re ending this review by giving it an 8.9 out of 10 rating.