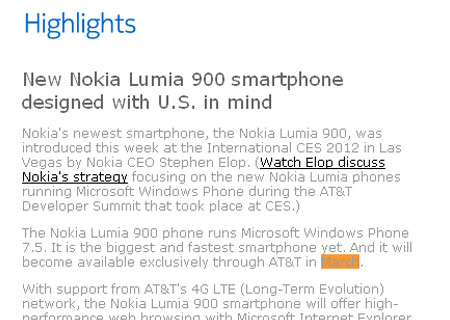 Recently announced at the CES 2012, the Nokia Lumia 900 smartphone is apparently scheduled to go live through AT&T starting this March. Well, this news wasn’t really made officially by the Finland-based mobile manufacturer, but it came about though a Newsletter which surfaced on the company’s official developer website.

Nokia may have blown its secret, but the guys over at WMPoweruser seem to have more details when it comes to the handset’s release date. Based on their sources, March 18 is what the report points to. Besides this latest addition to the Lumia series, the Windows Phone 7 platform will also have a second device to debut with support for AT&T’s 4G LTE network, the HTC Titan II to be specific. 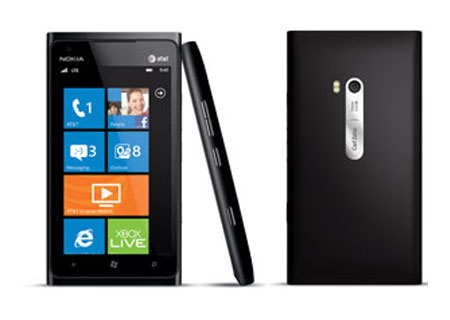 For a refresher, the Lumia 900 is wrapped with a 4.3-inch AMOLED ClearBlack display that portrays a resolution of 800 x 480 pixels, which is apparently the widest Nokia screens have ever gone. Powering its hardware components is a combination of a 1.4GHz Qualcomm Snapdragon APQ8055 + MDM9200 CPU and 512MB of RAM. The specifications sheet goes on to reveal an 8MP rear facing camera with Carl Zeiss optics, dual LED flash, HD video recording, Bluetooth 2.1 + EDR, GPS and Wi-Fi b/g/n standards. To compliment the aforementioned components is an 1840mAh battery that’s capable of delivering battery life for around 7 hours talk time or 300 hours standby time.

Although the Nokia Lumia 900 release date has been pinpointed as March 18 of this year, details on its price haven’t been disclosed yet. Hopefully, the Finland-based manufacturer will blow this particular secret open sometime soon as well.