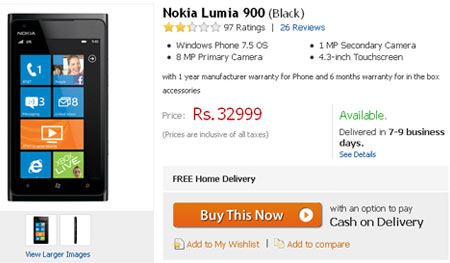 The Nokia Lumia 900 India price and availability details have gone live and the smartphone has come to the country without much fanfare. Released earlier this year, it runs the Windows Phone platform and has been made available through online retailers like Snapdeal, Flipkart, Infibeam, Indiatimes Shopping and more.

This latest addition to the Lumia range in India flaunts a 4.3-inch AMOLED ClearBlack glass touchscreen display on its one-piece polycarbonate body. A Corning Gorilla Glass coating on the capacitive display makes it resistant to scrapes and scratches. It renders visuals in 480 x 800p resolution. The front panel also boasts of a 1MP webcam allowing users to engage in video conferencing on the move, while the flip side accommodates an 8MP rear-facing snapper capable of capturing images as well as recording videos. 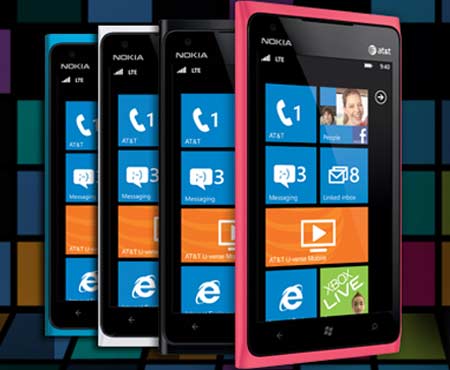 Additionally, the primary camera boasts of a number of features that include auto focus, dual LED flash as well as the Carl Zeiss lens. Running the Windows Phone 7.5 Mango platform, it is splashed with shades of black, cyan and white. A 1.4GHz Qualcomm Snapdragon processor makes the device capable of carrying out multiple operations at the same time, enabling users to multitask. It ships with 16GB internal memory and draws power from a 1,830mAh lithium-ion battery that coughs up the juice for talk time of about 7 hours on 3G or up to 8 hours in the 2G mode. The Wi-Fi-enabled smartphone has been pre-loaded with applications like Nokia Drive, Internet Explorer 9 and more.

The Nokia Lumia 900 India price and availability details haven’t been announced officially, but it can be picked up from various e-retailers for Rs. 32,999.