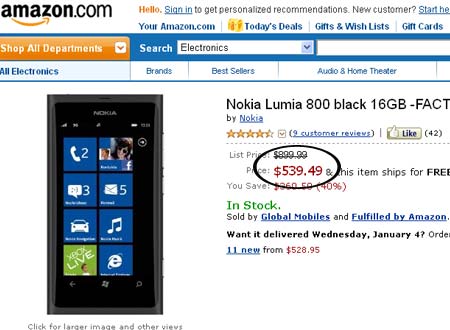 It’s been a nice spell for bargain hunters out there and things only seem to be looking up as the week starts off with Amazon now selling the Nokia Lumia 800 for around $540. We’ve never claimed to be geniuses at math, but that’s definitely a whole lot cheaper than the original list price of $899.99 that the phone sported.

The online vendor claims to have the devices in stock right now and it’s the 16GB unlocked version of the Lumia 800 that’s being offered in a shade of black. Whether the smartphone went down well among tech enthusiasts or not is probably another consideration all together, especially when the touch-centric handset sports such an attractively skinny price tag. Remember the HP TouchPad? 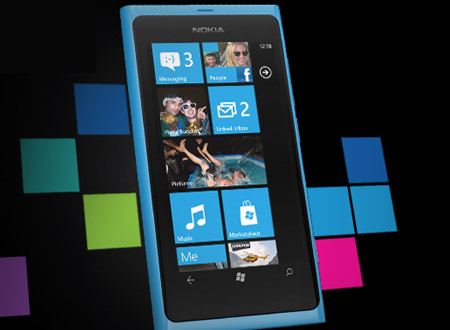 For those who intend to buy the Nokia offering and need to a reminder about the main specs – there’s a 3.7-inch curve AMOLED ClearBlack touchscreen integrated into a smooth chassis. An 8MP AF camera with 2x LED flash, HD video recording and Carl Zeiss optics rests on the rear. The gadget’s also packed with Wi-Fi 802.11b/g/n, USB 2.0, Bluetooth 2.1 + EDR and a single core 1400MHz Qualcomm MSM8255 CPU to boot.

Apart from stating that Amazon is only selling the black hued version of the device, Unwired View also happened to pick up on a $535 price label for it, with the nightmarish threat of just 1 being left in stock. When we last checked, the 16GB unlocked Nokia Lumia 800 was promising us close to $360 in savings if we snapped it up from the online retailer.