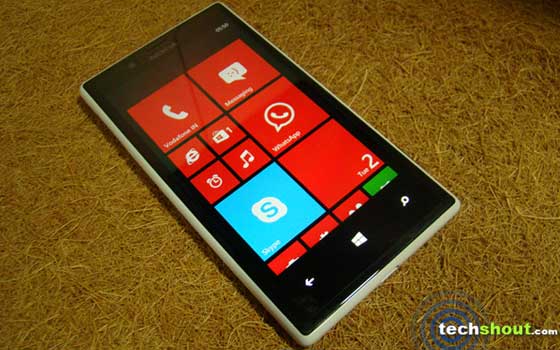 The Nokia Lumia 720, a mid-range Windows Phone 8-based handset has landed in our review lab and seems like a promising member of the Finnish manufacturer’s celebrated smartphone family. Aimed at users who wish to get a taste of Microsoft’s latest mobile platform without digging deep into their pockets, the phone that has the potential to compete with most mid-range devices borrows some elements from the flagship 920 as well. So let’s go right ahead and find out what the gadget has in store for us.

Apart from the Lumia 720 itself, the package contains all that you’d expect with the device. A charger with a detachable USB chord, a set of earphones and a couple of user guides have been placed inside the box. What you’ll see perched in a separate bay just below the phone is a metal key which happens to be an extremely important component that you wouldn’t want to lose. This key with a long pin end will come to your rescue every time you wish to swap SIM cards or microSD cards. Both of these trays open only when you insert the key in the dedicated hole. 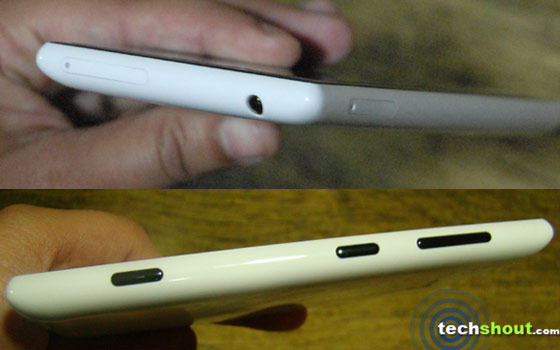 Like most of the devices belonging to this series, the stylish Lumia 720 in question comes drenched in vibrant hues such as black, white, magenta, cyan and yellow. Its sleek unibody form factor boasts of minimal elements and it manages to turn more than a few heads thanks to its classy design. At 128 grams, the gadget is lighter than its siblings, the 820 and 920 which tip the scales at 160 and 185 grams, respectively. And when it comes to thickness, it takes the cake yet again as the chassis measures merely 9mm, making it the slimmest WP8 contender from the company’s second generation range.

The polycarbonate unibody of the Nokia Lumia 720 is smooth to touch and comfortable to hold. Its dimensions of 127.9 x 67.5 millimeters ensure that the phone doesn’t seem huge and at the same time, accommodate a touchscreen stretching up to 4.3 inches diagonally. A fairly thin bezel comes along with clean and curvy edges. A 3.5mm audio connector sits on the top along with a SIM card tray and its right edge is graced by a volume rocker, a power button as well as a dedicated camera key. The left houses a microSD card bay, while a micro USB 2.0 port and a noise-cancelling microphone call the bottom edge their home. 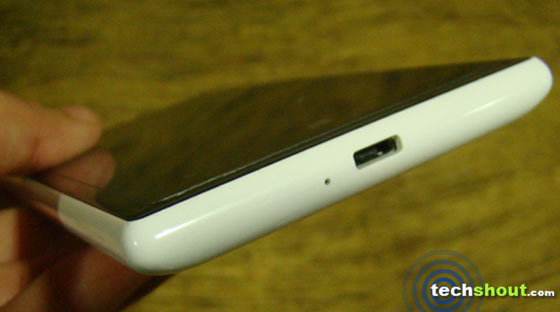 The front side is draped in a WVGA ClearBlack IPS touchscreen with an aspect ratio of 15:9 and a pixel density that stands at 217ppi. This super sensitive display protected by a layer of Corning Gorilla Glass 2, is accompanied by an ambient light sensor, an accelerometer, a magnetometer and a proximity sensor. Three capacitive buttons for going back, jumping to the homescreen and launching a Bing search, are placed below the screen, while a 1.3MP webcam takes up a little space on top of it. On flipping the phone backwards, you will find a 6.7MP camera with Carl Zeiss optics and flash perched on the top surface, whereas speakers are placed at the bottom. The Finland-based OEM’s logo stands out on the minimalistic rear panel of the smartphone.

The driving force behind the Nokia Lumia 720 is a Qualcomm Snapdragon S4 processor which ticks away at 1GHz and does an admirable job when it comes to multitasking. What is a tad bit disappointing is the fact that the company has bestowed the handset with merely 512MB of RAM, which makes it a little slow. Nevertheless, we haven’t seen any sluggishness in the phone and it usually has no issues with switching between apps. When it comes to onboard memory, it brings 8GB of space which of course, is not entirely available to users and can be expanded further using a microSD card of up to 64GB capacity. Complimentary 7GB of SkyDrive hoarding capacity is offered with every unit. 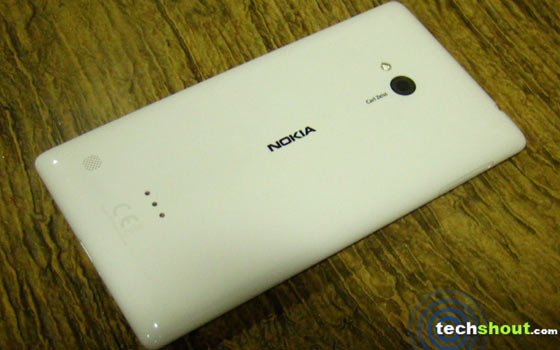 The Windows Phone 8 OS is at the heart of the Lumia 720 and we are glad to see that the platform has improved considerably over time. The display, as we already mentioned, offers a multi-touch area of 4.3 inches and although it has a resolution of 480 x 800 pixels, you are likely to appreciate the clarity and accurate color reproduction. It can run up to WCDMA networks here in India and can obviously be connected to hotspots.

You have the option of converting the handset into a mobile hotspot with its internet sharing function and when it comes to data transferring, you can take a little help from Bluetooth and NFC. A 2000mAh non-removable power pack shoulders the responsibility of keeping the device charged up for a long time and even tags along a battery saver mode, so you can continue using it for a little longer, in case you do not have access to a charging outlet. You can choose to power up this phone wirelessly as well, with the assistance of accessories such as a back cover and a charging plate, especially designed for this purpose. 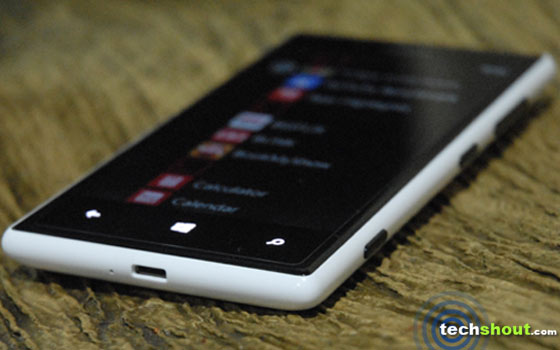 Performance-wise, the Lumia 720 can be expected to mirror qualities of its siblings such as the 820 and 920. It takes just a little less than 30 seconds to start and brings the same extremely responsive interface that is associated with Windows Phone gadgets. We haven’t experienced lags so far and the handset hardly ever crashes.

But not everything is hunky dory in Lumia land. Due to some unidentified software issues, the Lumia 720’s display freezes at times. We faced it while reviewing the phone and on researching on the internet, we found we were not the only victims. In case you find yourself staring at a blank screen, don’t panic. Just soft reset it by hitting the power button and the volume down key simultaneously and it should be back on track. 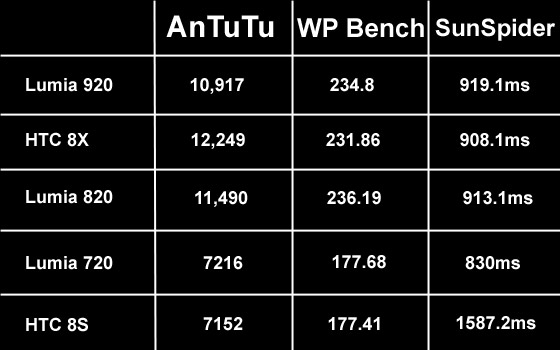 One of the biggest criteria while choosing a smartphone is its battery life and we will definitely give brownie points to the Nokia Lumia 720 for its ability to stay powered up for a considerably long time. On a single charge, the device offered usage time of roughly 13 hours with about 2 hours of internet browsing over Wi-Fi, about an hour of music listening, half an hour of talk time and close to 3 hours of gaming. The Finnish manufacturer has pre-loaded all of its usual applications like Here Maps, Here Drive, Care, Music and more in the phone as well, and they can come in extremely handy at times.

Although you cannot play all the games available in the Windows Phone store on this device due to low system memory, those titles which have been optimized for it work extremely well. And the company behind the PureView technology has made sure that photography enthusiasts are not disheartened when using its snapper. Its 6.7MP shutter with Carl Zeiss optics and LED flash is accompanied by a number of lenses such as Glam Me, Panorama, Cinemagraph, BingVision and Smart Shoot to the table. But we wouldn’t trust the gadget with low-light pictures. 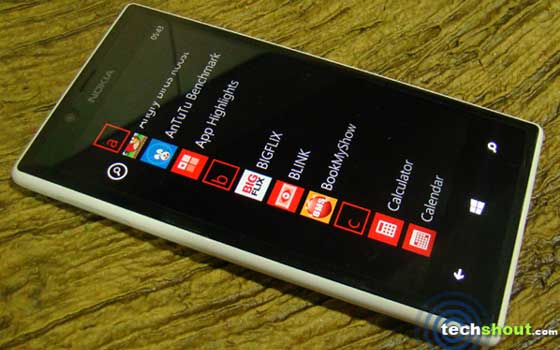 Its 9mm exterior appears extremely stylish and is apt for one-handed use. Also, it tips the scales at merely 128 grams, making it lighter than most of the current crop of smartphones.

We must say that we are impressed with the long battery life of the phone.

The 6.7MP Carl Zeiss camera is way better than the snappers of most devices in this price range. Although it captures only up to 720p videos, we are not complaining.

512MB of system memory refrains from supporting some of the games available in the Windows Phone store.

The screen freeze issue is persistent and soft resetting the device time and again can get a bit annoying.

The camera’s low-light performance is not up to the mark.

All in all, the Nokia Lumia 720 manages to offer most features that you would expect to see in your smartphone and the fact that it doesn’t break the bank speaks in its favor. While we wouldn’t say it is perfect, the handset does come very close to it and definitely builds up on the Windows Phone legacy. The gadget manages to earn a good 4 out of 5 rating from us. Potential buyers can lay their hands on its factory unlocked version in the US available for $350 through Amazon, while those in India can grab it for as low as Rs 16,599 through major retail outlets and web portals.