Price details for the Lumia 720 and 520 have been officially revealed for India at an event held in Delhi today, which marks the phones’ launch in the country. It’s odd that we’re seeing the handsets come to the nation so soon after they were revealed towards the end of last month at this year’s MWC.

The 720 is the more high-end of the two and comes with a curved 4.3-inch ClearBlack display which can boast of IPS technology and a screen resolution of 800 x 480 pixels. To the delight of photography enthusiasts, there will be a 6.7MP camera with auto focus, an LED flash and a Carl Zeiss Tessar lens, while a 1.3MP front-facing webcam facilitates video calling. There will also be a 2,000mAh Li-ion battery powering up the device. 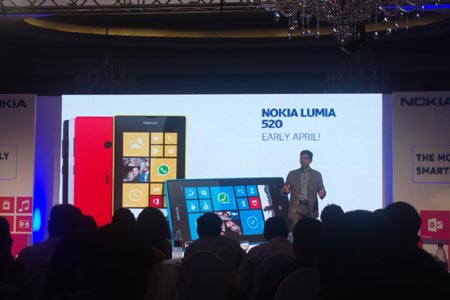 The 520 on the other hand, has a 4-inch IPS display putting out visuals at the same resolution as its bulkier sibling. A 1,430mAh Li-ion battery will have to do, but users can expect a 5MP camera with auto focus. It should be noted that there is no flash or secondary snapper. In addition, it will weigh just 124 grams with thickness standing at 9.9 millimeters. This is 4 grams lighter but almost a whole millimeter thicker than the 720. 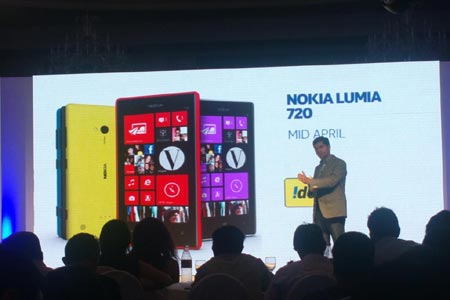 Both devices will run on the latest Microsoft mobile platform, Windows Phone 8, and will take full advantage of a 1GHz dual core Qualcomm Snapdragon processor. Other shared specs include the moderate 512MB of RAM and the generous 8GB of internal memory with 7GB of free cloud storage. Expansion is also mirrored in that both are capable of accepting microSD cards of up to 64GB in capacity. Connectivity options include Bluetooth 3.0, Wi-Fi and NFC, while in terms of wireless features users can expect A-GPS with GLONASS. 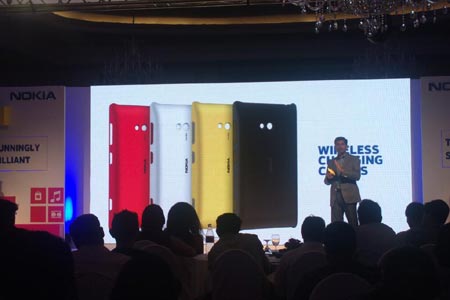 We reached out to Nokia India PR reps who’ve confirmed that the Lumia 520 will be made available during the first week of April for Rs. 10,500. They’ve also mentioned that details surrounding the 720 have not been finalized yet, although users can expect it sometime in the middle of next month, but an MRP is still to be decided and can tentatively be equated to €249 plus taxes, for a rough idea. Both will come in yellow, red, cyan, white, and black colors, but the 520 will have exchangeable shells.