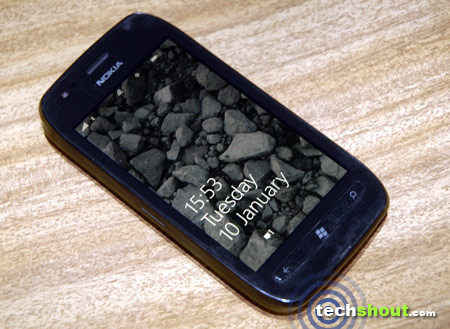 We knew that the Nokia Lumia 710 was eventually going to drop by for a review sooner or later. And when the device was finally in our hands, it was time we put this gadget to the test. We’ve already been acquainted with Microsoft’s mobile platform a number of times. And we just couldn’t wait to see what the Finland-based mobile manufacturer has hidden within this gadget. So if you’re hoping for a complete analysis on whether this Windows Phone 7-powered handset with the taste of Mango and a hint of Nokia, can give the competition a run for their money, you’ve stumbled into the right place. 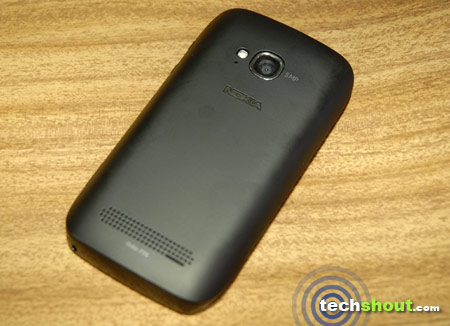 What lies within – ‘the packing’

Neatly packed in blue, we had to simply pull on a cardboard extension to extract the inner contents of the box. Although our hopes for a bright and colorful Nokia Lumia 710 handset were dashed, we had no issues in carrying on with the black variant for our review. However, a white form factor blended with the color fuchsia or cyan would have really brightened things up. And isn’t that what the Lumia series is all about? To shed some light on the device’s companions, we ran into a quick start guide as well as a product and safety booklet lying just below the smartphone. Furthermore, the lower end of the box comprises of three partitions, one for the charger, a second for the microUSB cable and the last compartment for a set of Nokia earphones that had a rather stylish, but highly delicate design.

To fit everything in one line, the Lumia 710 isn’t all that alluring. Putting specifications aside, this smartphone is somewhat like a buffed up variant of the Belle-powered Nokia 603. And if you come to think of it, the company doesn’t seem to be focusing much on the design here. Most handheld gadgets tend to be smudge-friendly, and the first few minutes we spent fiddling around with the touchscreen led us to believe that this handset could be an exception to that fact. But it didn’t take us long to realize we were wrong. So here’s a recommendation if you have sweaty hands and plan on picking up this unit – leave the scratch guard on. 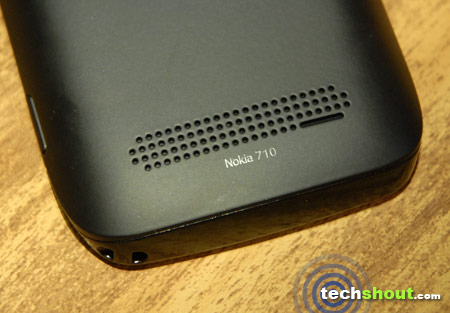 Beauty isn’t what crafted the Nokia Lumia 710, but logic most certainly played its part. The rear panel is covered with a smooth rubber surface that allowed us to wipe off any smudges or marks formed during the times we got the handset in and out of our pockets. It also provided a firm grip and a comfortable feel. The hard plastic body that’s crafted neatly flaunted a rugged and durable look. And whilst we were looking at its exterior without feeling exceptionally impressed, we managed to bump into volume controls and a dedicated camera button on the right and a microUSB port for charging or synchronizing with a PC, a 3.5mm audio jack as well as the power button that’s also programmed to send the gadget straight into sleep mode. The front sports three physical buttons for carrying out the usual operations, whilst the rear employs a 5MP camera with LED flash lying just besides it and a loudspeaker on the lower end. The total weight of the handset reads at 125.5 grams and its dimensions measure 119mm x 63.4m x 12.5mm. 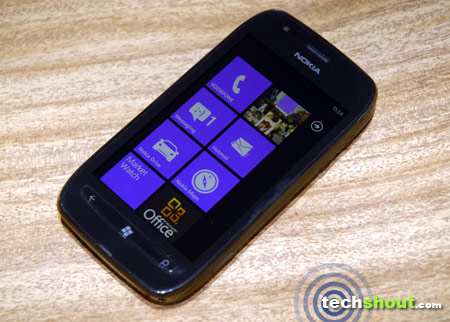 The Nokia Lumia 710 might not possess looks that are designed to kill, but its specifications sheet flaunts a strong blend of hardware components. Well, they aren’t as intimidating as the handset’s codename ‘Sabre.’ Unlike many other competitors outside Microsoft’s mobile OS grid, Nokia still has to adopt the concept of multi-core processors in its smartphones. And this is most probably one of the drawbacks for siding with the Windows Phone 7 platform. Anyway, a combination of a 1.4GHz Qualcomm MSM8255 processor with 512MB of RAM, 8GB of internal storage and a 480 x 800 pixel, 3.7-inch anti-glare display, accompanied by ClearBlack technology and a Corning Gorilla Glass coating is what Nokia has managed to cook up. In our books, these components are more than sufficient for basic everyday usage, so no fusses here. 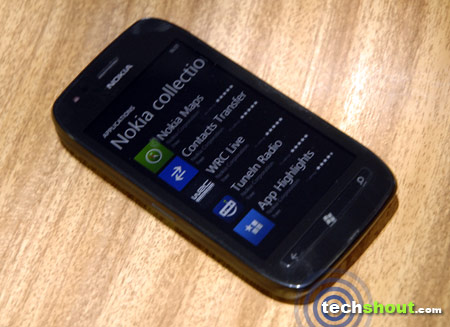 Nokia with the taste of Mango

Simple as it was, setting up the Windows Phone 7 based Lumia 710 didn’t take much of our time. However, for some reason the carrier’s data services just wouldn’t function, despite our many attempts. Since everything is simplified within the platform, navigation wasn’t a concern and it shouldn’t be, even for new users. Plus, the Help and how-to application houses a complete guide to all the know-how of the Lumia 710. We’ve said this before and we’re going to say it again – the deep integration of social networking features makes the interface really lively. What clung onto our goodwill were a few Nokia-specific apps such as Nokia Drive and Maps along with various others that can be found within the Nokia Collection category through the Marketplace. However, the Nokia Music app was nowhere in sight and neither could we download it. 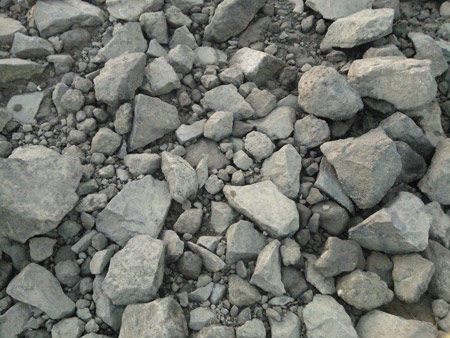 Performance-wise, there isn’t much of a noticeable difference between the HTC Radar and the Nokia Lumia 710, despite the latter’s CPU being bumped up a notch. What really kept us occupied were graphically enriched titles such as Hydro Thunder Go, Pocket God and Fight Game: Rivals. The smooth gameplay wasn’t the only thing that got us hooked; video and audio playback were also impressive. And browsing the internet was hardly any different from accessing websites through a computer, not taking the display size into account. Moving on to activity life, the 1300mAh battery lasted not more than 6 hours as we pushed it through a few intense gaming as well as web browsing sessions with the music player pumping beats in the background. Furthermore, approximately an hour of online and offline video playback was also a part of our tests. Pushing the smartphone to its limits, the WP Bench app recorded a maximum usage time of two and half hours through its battery stress tool. 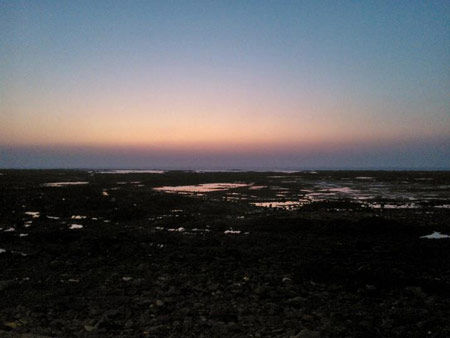 The display portrays clear visuals under the afternoon sun and even at low brightness settings.

The addition of Nokia-specific applications enriched our WP7 experience altogether.

The Nokia Music app was apparently lost and the in-built media player could use custom EQ settings for a better listening experience.

Nokia hasn’t equipped the handset with a front facing camera despite Mango holding support for this particular component.

The device’s overall body seems to have a high attraction towards smudges.

Just gazing at the Nokia Lumia 710 got us wondering – was the company’s decision to foray into the Windows Phone segment actually worth it? Based on our experience with the Belle-powered Nokia 700 handset and compared to our views on this Mango offering, all we can say is that Microsoft’s mobile OS has indeed shone bright through the Lumia series. To back our words, we’ve given it an 8.5 out of 10 rating. As far as pricing goes, this slice of Mango is available unlocked for $419.99 through Expansys or at Rs. 18,999 in India. For those siding with a carrier-locked variant, the mid-range device has gone live through T-Mobile USA.