Nokia Lumia 625 up for pre-order in India

The Nokia Lumia 625 was the last to make its appearance on the company’s India website, but it’s the second to go up for pre-order in the country. The Lumia 925 which can be reserved online for Rs 33,999 and the PureView 1020 are both expected to hit availability status soon, and Nokia plans on unveiling all three handset by the end of the month.

The Nokia Lumia 625 started off like all other devices, in the form of rumors. It’s currently the largest in the Lumia lineup with a screen size that’s 2 inches wider than the tallest member. Well, instead of providing HD visuals to make the panel more enjoyable, the company has left its resolution at WVGA 800 x 480 pixels. The technologies used for the LCD include IPS and super sensitive touch, while protection is delivered through Corning Gorilla Glass 2. The Nokia Lumia 625 is merely a buffed up version of the 620. It features the same looks and similar specifications. 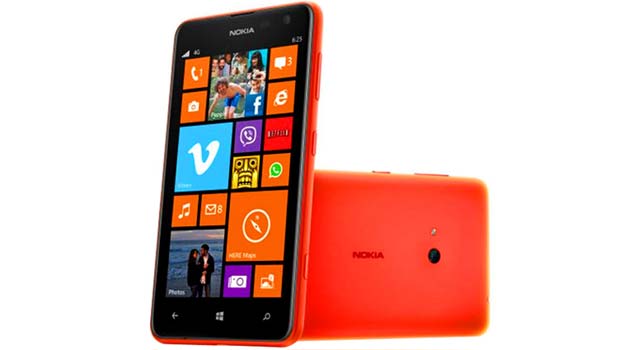 The device measures 9.2mm thick and it weighs 159 grams. Like all other WP8 devices, a dual core Snapdragon processor delivers the steam. The AP is clocked at 1.2GHz. Other components include 512MB of RAM, Bluetooth 4.0 + LE, Wi-Fi 802.11 b/g/n, 8GB of storage and a 5MP AF camera. The Nokia Lumia 625 has a 2000mAh battery. The company asserts that it can deliver approximately 23 days of standby, 15.2 hours of 3G talktime, 90 hours of music listening or 6.8 hours of video playback.

There’s no price as yet for the Nokia Lumia 625, but you can go ahead and pre-order the smartphone through Snapdeal by paying Rs 1,000 in advance. The remaining amount will be payable when the smartphone is released. Speaking of which, multiple retailers have pegged the launch for the end of August.