Buzz around town is that the Nokia Lumia 625 is what the manufacturer was referring to when it announced that ‘Something BIG’ is due to arrive today on its official blog. It looks like the Nokia isn’t the one to lie back and watch others work their way through the market, seeing as this news has come on the heels of the 1020 launch.

While the OEM has abstained from revealing anything at this hour, a Finnish publication named Puhelinvertailu has thrown some light on the Nokia Lumia 625. The good news is that the information delivered by the site agrees with the conjectures made in the past. So this gives us more reasons to believe that the handset will indeed wrap a 4.7-inch display, hidden underneath which are a 1.2GHz dual core Snapdragon S4 CPU, 512MB of RAM and a 2,000mAh battery. 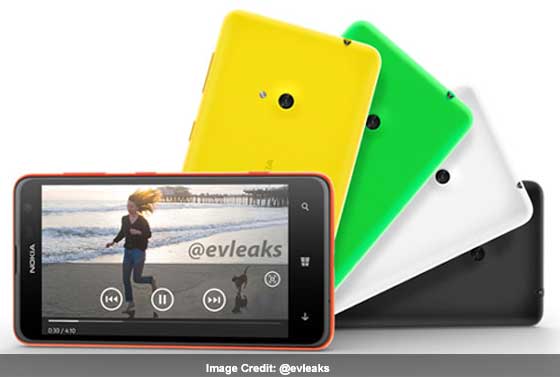 Additionally, the inclusion of Windows Phone 8 is a no-brainer. Engadget has reported that the publication speaks of a Gorilla Glass 2 protective layer for the touch display which has been infused with IPS technology. It also mentions the existence of a primary 5MP camera on flip side of the Nokia Lumia 625. Featuring an LED flash and full HD video recording capabilities, the shooter is accompanied by a VGA webcam.

There is quite the chance that an LTE variant might be dedicated to European networks. Also contributing to this set of speculations is @evleaks. The Twitter account has emerged with a handful of pictures, parading the smartphone in a host of bright shades such as white, yellow, green and more.

Since the event will be held at 9 a.m. as per UK time, it’s only a matter of few minutes before we can confirm this bit of news about the Lumia 625. So stay tuned.