We already knew that the Lumia 625 was coming and now Nokia has gone on record to confirm the arrival of the gadget attached with a price tag of €220. This is just an estimated price of the Lumia smartphone which is gearing up to set foot in India, China, Middle East, Africa, Latin America, Asia Pacific and Europe in the third quarter of this year.

It goes without saying that the Lumia 625 takes advantage of the Windows Phone 8 OS and the handset happens to be the largest contender in this series. The device is encased in a chassis with dimensions of 133.2 x 72.2 x 9.2 millimeters and shows off a 4.7-inch display on the front panel. Reinforced with a layer of Corning Gorilla Glass 2, the touchscreen with a pixel density of 201ppi and an aspect ratio of 15:9 can deliver visuals in 800 x 480p resolution. 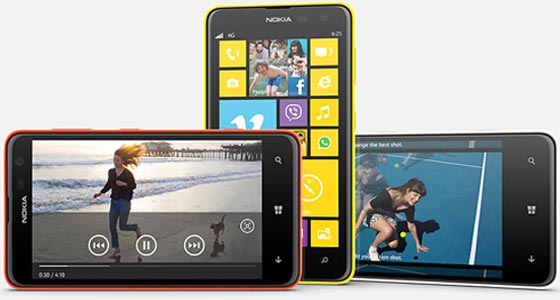 The handset is compatible with micro SIM cards and comes armed with dual cameras. Its 5MP primary snapper with LED flash can be employed for the purpose of capturing 1080p videos at the rate of 30 frames per second, while the front-mounted VGA lens facilitates web conferencing on the run.

A 1.2GHz dual core Qualcomm Snapdragon S4 processor is the driving force behind the device. The phablet brings 512MB of RAM and 8GB of onboard memory in addition to 7GB of SkyDrive storage. It even has an expansion slot for increasing the storage by up to 64GB with a little assistance from a microSD card. And what’s more, the smartphone’s 2000mAh battery manages to provide talk time of about 23.9 hours in the 2G mode.

The Lumia 625 will be made available for the aforementioned price in this quarter itself.