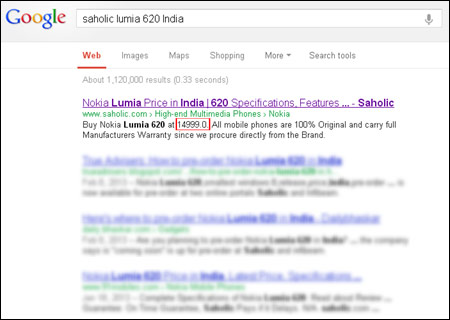 The Nokia Lumia 620 has peeked out at potential customers in India, and it seems as though a price of Rs. 14,999 was briefly posted on Saholic. As it stands, this is now missing from the e-retailer’s page for the product. We’ve grabbed a screen off Google just to be sure, but when the phone does land in the country, we’re highly skeptical that it will make said tag. In fact, eBay.in has various versions of the WP8 device, shipping directly from the US, each carrying different charges, all of which are positioned at higher points than the former’s listing.

While the 920 and 820 are already available to purchase in the country, the handset was expected sometime in the second week of February. But the company hasn’t officially launched the handset, leaving many to speculate on the reasons and repercussions of the delay. The two devices with wireless charging capabilities come unlocked for about $450 and $400 respectively, but sell here in the country for considerably more than a simple currency conversion would indicate, as per the current exchange rate. 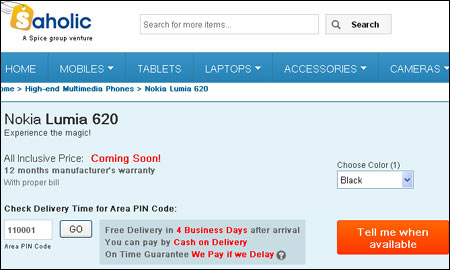 Let’s not forget, the smallest in the new range comes with just 512MB of RAM, a 1,300mAh battery and a front-facing VGA webcam. The appeal of Windows Phone 8 as an OS is definitely there, while a 3.8-inch ClearBlack capacitive display can’t hurt its pride. Meanwhile, it boasts of a dual core 1GHz Snapdragon S4 processor, 8GB of internal memory and a 5MP rear camera with AF and LED flash. 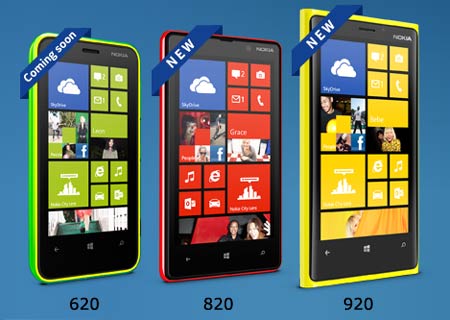 Coming to the eBay.in listings, they have the phone shipping in black and white color options from two destinations – Houston in Texas and New York. Those who are willing to throw in their chips and get it early can do so for as little as Rs. 20,017, with the highest listing on the website spelling it out for Rs. 33,617. It should be pointed out here that Saholic also has the soon to be made official BlackBerry Z10 up for pre-booking at Rs. 45,000. This is an estimated evaluation and the balance will be refunded should the actual value be less.

For now the Lumia 620 remains a very fashionable handset with its changeable covers, but it is yet to get an official release for the country, even though it has been spied on an online retailer, albeit in a rather roundabout manner.