Considering the success of its predecessor, the Nokia Lumia 530 is poised to be a pretty big deal as well. And hence the surfacing of its alleged image has turned quite a few heads. Although information about it was leaked earlier, this is the first time that we’re looking at an apparent image of it.

Although low-quality, the picture we’ve embedded in the space below shows the Lumia 530 placed alongside its 635 and 930 cousins. Coming from Geek on Gadgets, this image gives away a few valuable details regarding the phone as well. 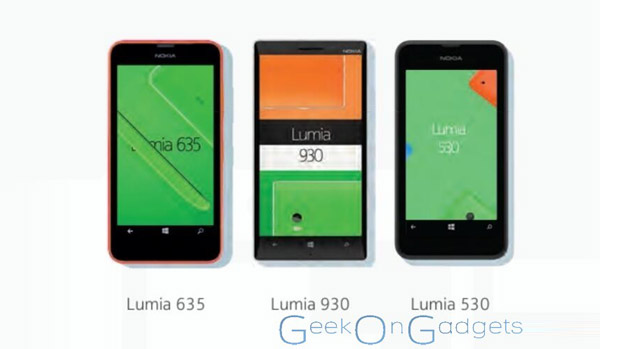 For instance comparing its screen size to that of the Lumia 635’s, it can be noted that it is only smaller than the latter’s. Hence, because the 635 holds a 4.5-inch display, the Nokia Lumia 530 might grab a 4.3-inch panel on its front surface. This will be an upgrade over the 4-inch screen estate that can be found on its predecessor.

One more thing that catches your eye is the presence of on-screen buttons which were introduced through Windows Phone 8.1 by the Lumia 630 and 635 phones. Just like the 520 however, there seems to be no front-facing camera present on the face of this device. You can expect a 5MP or perhaps even an 8MP shooter to make its way onto its rear surface.

A while ago, we had heard that this smartphone is headed to T-Mobile in the US under the codename Rise. But as was the case then, we do not have any concrete specs to talk about yet. Here’s hoping they leak out in the open soon.

Stay tuned for more details about the Nokia Lumia 530, as we’ll be bringing them to you as soon as they’re out.