We have been hearing a lot about the Nokia Lumia 525 codenamed Glee of late and had laid eyes on a picture of the device only yesterday. And now a press render of the smartphone has surfaced on the web that leaves nothing to the imagination.

If you haven’t already guessed who the source of the picture is, then let us tell you it is our very own serial leaker @evleaks. It was this Twitter account which had first revealed that the device will come drenched in the shades of white, yellow and orange and the picture below only goes on to confirm this bit of information. Hopefully, the Glee will arrive splashed in other shades like black and magenta too, like most of its other Lumia siblings. 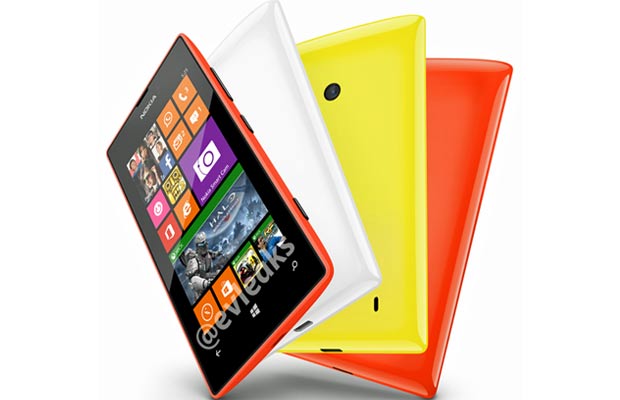 At another instance, the Finnish company accidentally confirmed the handset by announcing it as the prize for a contest. And yesterday, we even happened to come across its specifications and found out that it is likely to be a music-oriented device. If we were to go by the name, the phone appears to be a sequel to the Lumia 520 which means that we can expect it to be budget-friendly.

Apparently, the Lumia 525 shows off a 480 x 800p touchscreen that sits snugly on the front side of the exterior measuring 119.9 x 64 x 11.2 millimeters. It weighs about 124 grams and crams in a dual core Qualcomm Snapdragon S4 processor and 1GB of RAM. The phone may employ a 5MP camera as well.

And that’s certainly not all. The Nokia Lumia 525 device’s price is also being speculated and it could be 1,299 Yuan (approx. $214). We are yet to hear something about its availability though.