Just in case you didn’t believe the numerous other rumors about the Nokia Lumia 1520’s specs, here’s another confirmation which has been leaked ahead of the Finnish company’s launch event which is scheduled for tomorrow. A Chinese online store called Tmall accidentally published a product page for the phone and let slip its features.

No images were attached to the listing, but the details did confirm what we’ve been hearing about the Lumia 1520 aka Bandit, all along. Engadget notes that a price of 4,999 Yuan or roughly $819 was attached to the device. 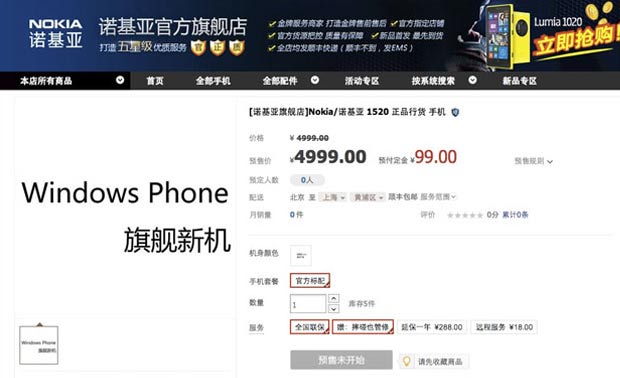 Here’s what we know so far

– The Lumia 1520 will run on Windows Phone 8
– It’s front will be taken up by a 6”, 1080p full HD screen
– The touchscreen will be of the AMOLED type with PureMotion HD+
– A 2GHz quad core Qualcomm Snapdragon 800 processor’s hiding inside
– The star feature is the 20MP PureView camera with Carl Zeiss optics
– The phone may offer 16GB/32GB storage along with 64GB microSD support
– It will sport a unibody form factor measuring 152mm x 81mm x 8.7mm
– A 3400mAh battery may also make it into the specifications sheet

According to previous reports, AT&T is expected begin selling the Nokia 1520 for a starting price of $299 on contract. Take away the subsidies and you have a $699 smartphone in your hands. So watch out for its market debut stateside in the second week of November.

Fans in other parts of the globe may have to wait until December to lay hands on the phone. Spare a glance for Apple too tomorrow?