Nokia Lumia 1520 in the flesh, we’ve also got specs

Nothing is safe from the internet, especially unannounced smartphones like the Lumia 1520. Following various leaks over the last few weeks, new images of the device have surfaced online, but time of it in the wild. Also, the source of the pictures claims to have quite a good deal of specifications which confirm previously rumored ones.

The Verge has managed to obtain an entire gallery of images which are allegedly of the Nokia Lumia 1520. As clearly depicted in the pictures, the smartphone is still a prototype, so the design is probably not finalized. As noted earlier, the handset looks a lot like the NL 925. The rear shows off a large sensor which is said to be 20MP and the PureView as well as Zeiss banding can be found just below it. One image of the camera UI suggests that you’ll be to save a 16MP shot and an additional 5MP one. The handset’s has also been compared with a 5-inch Xperia smartphone (probably the Z1) and the iPad mini. It’s evident by the images that the phone’s display will be about 6 inches.

Where the specifications are concerned, the Lumia 1520 will have a 1080p touchscreen, 2GB of RAM, a quad core Snapdragon 800 processor, 32GB of storage and a microSD card slot. The device will operate on Windows Phone 8 GDR3 which tags along various new features such as support for FHD screens, more rows and columns for Live Tiles, Driving Mode, rotation lock and enhanced multitasking. 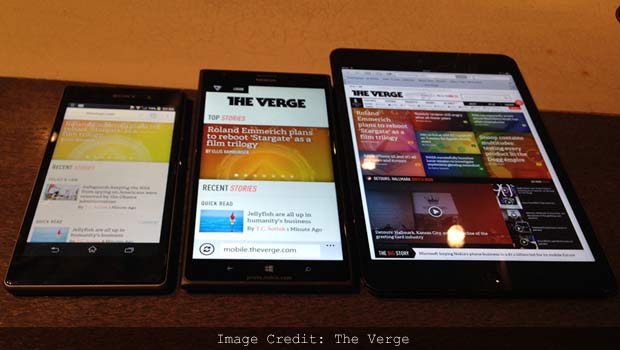 The Nokia Lumia 1520 is expected to arrive via AT&T in the coming weeks.