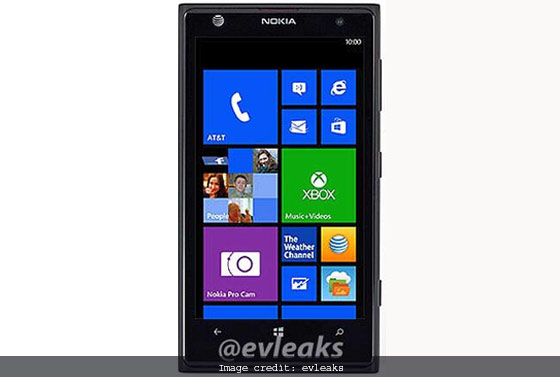 A new Nokia Lumia 1020 smartphone has hit the rumor mill and it’s apparently none other than the Nokia EOS handset. The Nokia EOS handset that we’re talking about is expected to be the Windows Phone version of the Nokia 808 PureView (read our review here). While we’re yet to hear any official word on the big surprise that Nokia has planned for the 11th of July, it’s most likely to be a 41MP camera phone.

This little detail was confirmed by the Finnish company itself in a blog post that had part of the header reading ’41 million reasons to zoom in.’ Now the specs of the Nokia Lumia 1020 may have stayed as well concealed as the manufacturer wished it to. But the evleaks Twitter account has posted what appears to be a press shot of the handset. Very little has been revealed by this leak, though we daresay, it should be good enough to keep Nokia EOS fans on their toes.

First off, it’s going to be the Nokia Lumia 1020, not the Nokia EOS. This was ‘confirmed’ by the said Twitter account on June 25. Two additional bits of information have been revealed along with the sneaky shot of the phone now. If you look closely at the image, the regular camera app has been replaced with a differently designed one. It is also labeled with the words Nokia Pro Cam. We’re assuming the new application should allow a greater degree of control over the monster of a sensor decorating the back panel.

It’s been mentioned that AT&T will be carrying the Nokia Lumia 1020 stateside. If the photo is anything to go by, then all doubts can be expelled by the AT&T logo decorating the upper right part of the bezel. It’s a pity we couldn’t get a glimpse of the part that interests us the most – the rear. Unless Nokia found a way of magically squeezing a large sensor into a regular Lumia form factor, the front belies what lies behind. And we’ve seen purported pictures of the side profile before.

The price of the 808 PureView is enough to tell us that this Lumia 1020 baby won’t be cheap. Well, it will at least be sporting a relatively more appealing OS than Symbian.