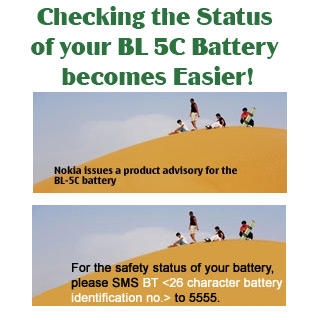 On Tuesday, we reported about a Product Advisory issued by Nokia for its BL-5C battery that has been manufactured by Matsushita. Now Nokia has gone ahead and is providing further help and assistance to its customers in India. The Finnish mobile giant is offering s string of special services such as SMS, helpline and website – in order to help its customers in the country by quick identification of the BL 5C batteries and subsequent replacements, if required.

Nokia phone users, from the comfort of their home itself, can get in touch with Nokia India using one of the following options:

But our personal advice is that instead of panicking unnecessarily first and foremost any Nokia phone user should check if his or her battery has the BL 5C number at all. If yes, then go ahead and verify your batteries status by following any of the above mentioned options. If the answer is positive, then Nokia guarantees that a new free battery will be delivered at the doorstep by courier, in exchange of the old battery.

It’s important to note that Nokia has several suppliers for BL-5C batteries who have jointly developed over 300 million BL-5C batteries. But the advisory that has been issued only and only applies only to the 46 million batteries manufactured by Matsushita between December 2005 and November 2006, from which there have been around100 incidents of overheating reported globally. Luckily, no serious injuries or property damage have been reported.