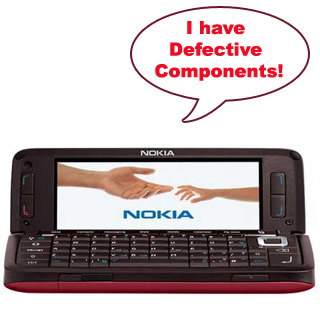 As if the Nokia battery issue wasn’t enough to drive the whole world crazy, Nokia has now revealed an issue in one of its other devices too.

It seems the newly launched Nokia E90 Communicator that has a high demand, sadly has a defective component in its microphones, which has ultimately adversely affected the phone’s availability.

There have been customer complaints that states that during phone calls one can hear background noises. And all this was thanks to a defective part in E90’s microphone.

Whilst speaking to Reuters, Nokia spokes Theresa Parenteau stated, “Although the issue is now rectified it has resulted in more limited availability than originally anticipated in some markets.”

In addition, there are customer grievances regarding scratches on the phone screen caused by some keyboard keys touching the screen. However, Nokia has quickly resolved this issue by adding a strengthening layer on the screens and modifying the keyboard, so the keys will not touch the screen.

Quite an irony that such an awesome device like the E90 also has such issues. When we reviewed of the Nokia E90, we were totally floored by it. Well, we now have second thoughts.