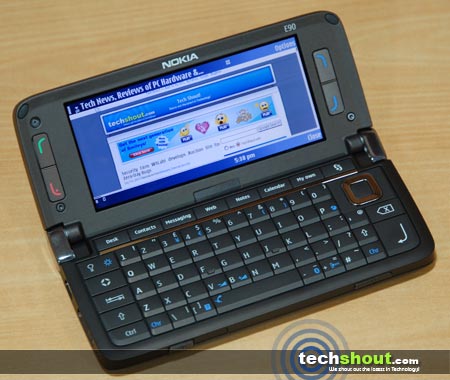 In the recent past, a flurry of new and advanced mobile phones has made their pompous entry into India. And the latest one to join the bandwagon is the Nokia E90 smartphone. But hey this is not just any ordinary mobile device, but a smartphone as it incorporates some truly ‘smart’ and intelligent functions. Undoubtedly an owner’s delight and a neighbor’s envy, that’s what the Nokia E90 exactly is. Read on to know why we seem to be so awed by this multimedia device.

But before we throw the light on the E90, let’s speak a little about the journey of communicators, from what it was to what it now is.

Earlier phones in the communicator series were dubbed as Bricks (sorry iPhone, but your misnomer was taken long back) and even as bad as bulky compass boxes.

To begin with, the E90 smartphone is the first device, which is not a Nokia 9xxx series’ model that has been given the tag of Communicator. Coming to its appearance, it comes in two colors, mocha and burgundy (in layman terms, black and red!). As James Bond would say it, ‘first things first’. Yes the first thing that you notice about the E90 is the size. And what a breath of fresh air that seemed to be for sure! It essentially looks like an N70 enclosed in a shell! And if you’ve ever held the old communicators, then you would exactly understand how compact the E90 actually is. 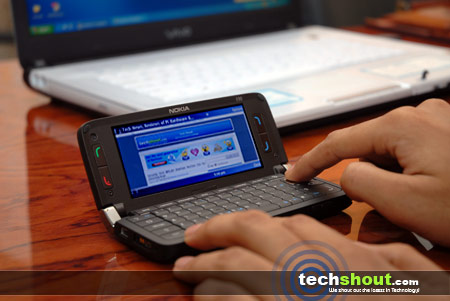 Now coming to the main features of the Nokia E90 smartphone, the device features one of the fastest RAM in a Nokia phone, 128 MB coupled with a faster processor. This enables the phone to work efficiently. You can run several applications in the background without making it slow or freeze. The Nokia E90 is the first communicator to run on a single platform. It has S60 3.1 platform running on Symbian OS 9.2, which allows you to continue with the same action even when you flip screens.

It has a cool QWERTY keyboard that makes web browsing a true delight on this phone. And of course the inner display which is 800 x 352 pixels of size only adds on to the pleasure. The large screen makes the web pages look just as though you are surfing the internet on your PC monitor. 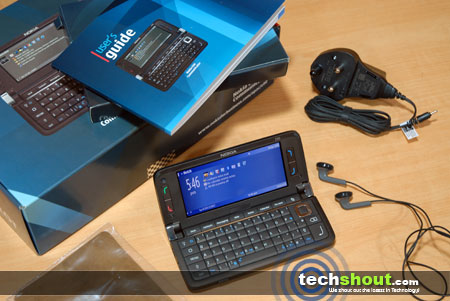 Normally to browse the web from a mobile phone, users have to use a GPRS connection, which sometimes can be expensive depending upon the carrier and the plan or 3G capability, which ironically is not available in all countries including India. However, the Nokia E90 communicator has Wi-Fi capabilities and all you have to do is go into a Wi-Fi hotspot and start surfing.

And of course it does include other basic features such as FM Radio, Media Player. The QWERTY keyboard makes sending SMSes and writing notes very easy. The Nokia E90 has a 3.2 MP camera with which you can click photos and also record videos. It features various different modes and settings that you would normally find in a digital camera. You can also make video calls with your E90. Besides these functions the smartphone has a host of other functions such as Clock, Calendar, GPS, Calculator and Converter. It also comes with a QuickOffice and Adobe PDF that let you view all your office documents. And if you have a printer nearby, you can use the Wi-Fi functionality of the phone to print documents. In addition, it also has a Barcode reader which scans barcodes.

Though the Nokia E90 is close to flawless, but as the old adage goes, “Nothing is perfect,” this device also cannot be given a perfect ten on ten.

Firstly the keys, especially the ones next to the Menu buttons on the front side could have been perhaps a little bigger. There is a lot of space at the bottom and instead of squishing the keys on the top; they could have ergonomically designed the main keypad. Secondly, we would have loved it if there were some more games included in the device. And here’s probably the biggest drawback, or may I say lack that I found in the Nokia E90. After having so many plus points one wonders why the Finnish mobile giant compensated on its memory capacity. Ironically, the phone supports and expandable memory of only up to 2 GB, which we feel is very low considering the fact that these days people do carry a lot of data on their phones. However, here’s some bleak ray of light that we see as there is a possibility of Nokia coming out with a newer version that would support up to 4 GB of expandable memory.

The Nokia E90 India price is Rs. 38,000, (that is around US $940, when converted) which seems like quite an affordable device for such a plethora of features and suave to its look.

Our Shout: We are giving the big black beast 9.5 out of 10 as we feel that Nokia E90 Communicator is one of the best phones available in the market and it is a steal if you are paying just Rs. 38,000 for a phone that has two screens and a QWERTY keyboard. We would recommend the E90 not only to higher level executives but also anyone who is an office goer or a B-School student as it would be a nice return on investment.