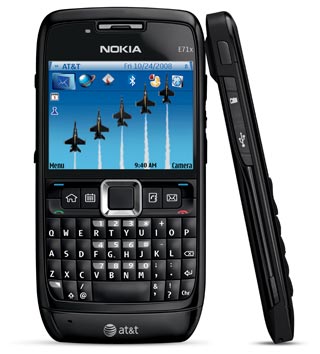 Nokia has announced its “thinnest” QWERTY smartphone – the E71x for AT&T subscribers in USA. The smartphone will be retailed in AT&T stores and online on the official AT&T website. Its retail price is $99.99 and will come with an AT&T contract.

As per the contract the phone will be available for $149.99 and after a mail-in rebate, subscribers will receive a $50.00.

“We are excited to introduce the sleek Nokia E71x into the hands of messaging, social networking and email fans across the United States,” said David Petts, Vice President and GM, AT&T Account for Nokia. “The Nokia E71x is building on the success of an award-winning smartphone design, which we are thrilled to bring to an even broader audience across the United States with AT&T.”

When available on the AT&T network, the phone will come bundled with services like the AT&T Navigator.

E71x will be available in the color of black steel and expected in soon in coming weeks.