Nokia E71 Review: A business phone for the stylish 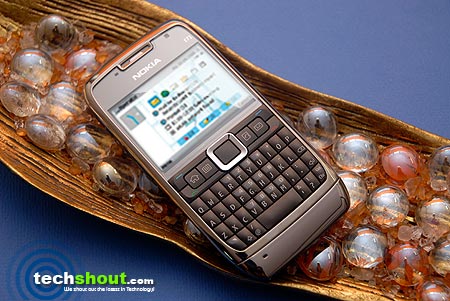 While Blackberry may claim to have changed the face of smartphones, Nokia we must say is catching up soon. The Nokia Eseries definitely stands out among the intelligent devices offered by the company for professionals always on the move. And one among these many interesting phones was under our wings a few days back ready to be scanned. Yes, the latest smartphone to have reached our desks for a review is the Nokia E71. A smart business phone, the E71 comes in a regular form factor that it’s typical of business-centric phones. Yet the phone managed to leave us satisfied offering more than what we asked for. Here’s a look into the world of the E71.

Let’s start off with the looks of the phone. While the phone adorns a regular smartphone form factor with a traditional QWERTY keypad, it’s much sleeker than the Blackberry phones or any smartphone for that matter. In fact we haven’t really seen such a chic business phone for a long time now. With a rather anorexic frame for a smartphone, the Nokia E71 definitely catches the eye with its steel chassis. The compact phone oozes style in spite of its solid fabrication. The device is also amazingly light and carries itself nicely in the palm. The phone additionally includes two dedicated volume control buttons, voice command activation key and a headset jack on the right hand panel while the USB port and microSD card slot have been retained like other Eseries devices on the left hand side.

Moving on to the screen of the phone, it’s a 2.36” QVGA display boasting of a resolution of around 320 x 420 pixels. The screen appears to be a little smaller in size when compared to the other devices. However it ensures that the quality of the text, images and other content is left untouched, they still appear rather sharp for a small screen. A highlight of the screen we think is the inclusion of two separate home screens that allow you to actually toggle between Personal and Business modes. There’s a switch mode function on the right corner of the screen that allows you to take advantage of this feature. In the Business mode you get a shortcut of the Web, Mail, Clock, Active notes, Bluetooth, Clock, WLAN connectivity and Calendar entries. The Personal mode transforms the phone into a personalized phone with shortcuts to a music player and the gallery in addition to the Web and Email. Overall the screen is easy on the eyes and pretty clear.

Another glance at the E71 phone and you will notice the rather well-fitted QWERTY keypad. With regular buttons to Answer and End Call just below the display, the phone also includes the Menu, Calendar, Contacts and Messaging buttons on the keypad. The QWERTY keypad appears below these buttons. It seems a little too crowded since the phone is much sleeker as compared to earlier Eseries devices. However the tactile feedback experienced when typing kind up makes up for the cramming keys. The physical layout of the buttons has less spacing between them however they are not too spongy unlike other QWERTY phones.

Incorporated with the Symbian OS, the Nokia E71 phone additionally offers complete support for various Microsoft documents like Word, Excel and PowerPoint. Yes, with the Quicksuite software, getting around documents is a breeze. Besides, the phone also packs in Adobe Reader and a Zip Manager. If your business centric mobile requirements center on messaging then the E71 aptly delivers. The phone supports both text and multimedia messaging. With major functions revolving around satiating your messaging needs the phone does more than just emailing. Featuring a full attachment viewer, the phone is also compatible to POP3, Microsoft Exchange Server, SMTP and IMAP accounts and has a full attachment viewer while also being enabled to a number of push email solutions like Intellisync Wireless E-mail Visto, and Seven Always-On Mail. Besides, you can also take advantage of the novel email set up wizard that allows the device to auto-search for email settings. In addition to this, an incorporated download function allows you to download a wide range of software. 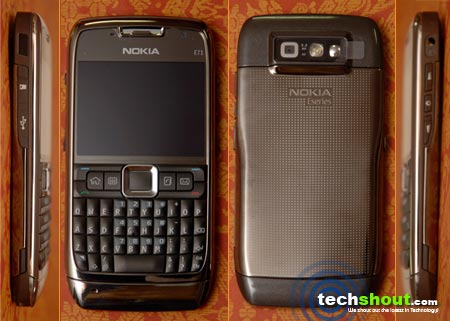 The inclusion of GPS functions should further enhance your mobility needs. The phone boasts of a GPS application that contains maps and GPS data along with landmarks. With integrated A-GPS, the tool is really fast. Additional features of the phone include calendar, active notes, calculator, currency converter, clock, voice recorder, world roaming, speakerphone and conference calling. The E71 further wraps in features like voice commands, speed dial and VoIP calls. The handset includes around 110MB of internal memory and its card slot supports up to 8GB memory. Connectivity options of the phone include support for Wi-Fi, Bluetooth, Infrared and Modem.

In case you have been wondering if the personal mode of the device functions, fret not. The phone does in fact include many features that should take care of your multimedia requirements. Integrated with a music player, the phone supports a host of music files like MP3, WMA, W4A, AAC, AAC+, eAAC+ files, OMA DRM 2.0- and WM DRM-protected songs. It sports features that should enhance your music listening experience too. It is also enabled for 3GPP and MPEG-4 video files. The phone’s 3.2 megapixel camera is pretty decent. It supports video recording and features like an LED flash, autofocus and digital zoom. The phone allows you to seamlessly share your photos and videos. The E71’s battery should offer a talktime of around 10.5 hours and a standby time of about 17 days.

A highlight of the phone we think is its super-slim form factor. Nokia has definitely upped the quotient of stylish smartphones with the design of this handset. It instantly catches the eye and fits well in both business and personal environments.

The phone certainly gets a thumbs-up for performance. We didn’t really face any connectivity problems or issues while browsing the Web. In fact browsing the Web was a distinct experience and rather speedy.

While the call quality of the phone was pretty decent, its battery was also quite consistent. It managed to offer a good back up in spite of heavy usage.

Also the inclusion of the dedicated volume buttons on the phone’s panel seems like a thoughtful gesture on Nokia’s part. Further, the phone’s D-pad also left us impressed and offers great control.

What we must also mention is that the phone was pretty responsive. It never really bothered us by lagging or freezing.

A major flip side of this phone is its screen size. Yes, the phone’s beauty appears to have made way for a much smaller screen size. Considering the phone would be used quite frequently for browsing and sending emails, a larger screen size would have done wonders.

The Nokia E71 may not suit users with large fingers because the spacing between the keys is minimal and appears a bit too stuffed up.

Another sneer we have is that the back of the phone gets constantly smudged and marked by fingerprints. The phone could also have been preloaded with some instant messaging clients.

Additionally the quality of images and videos was quite disappointing. We do understand the phone is a business phone, but Nokia could definitely have improved the standards.

Another aspect that left us dissatisfied was games. The phone only includes Solitaire and it could have been loaded with a few more interesting games.

The phone’s price too we think is a little too much. With the various options available in the market for smartphones, the phone seems to be a bit too expensive.

Overall reviewing the phone was a rather enjoyable experience. It managed to perform well on most occasions and proved to be quite an all-rounder. It definitely gets a nod from us. The Nokia E71 costs approximately Rs 18,000. We rate the phone around 8 out of 10.