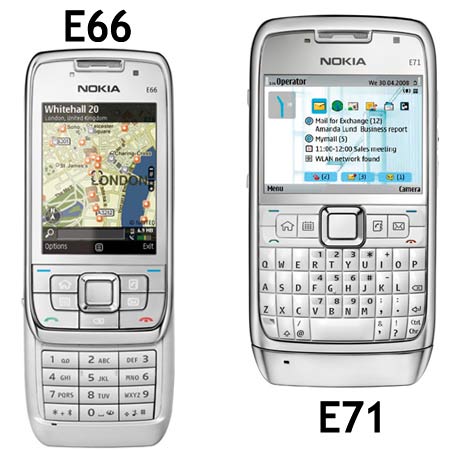 Nokia is all set to grab Indian businessmen’s attention with its two new business phones namely E71 and E66. Both the phones are equipped with business features such as Microsoft Exchange, the world’s most widely adopted corporate email solution.

The Nokia E71 phone incorporates QWERTY keyboard. Besides, the slide phone allows users to access easy-to-install and easy-to-use professional and personal email. They can also download e-mail attachments such as Word, Excel, PowerPoint or PDF files. Functions like calendar, contacts and tasks are some of the features that make E71, a complete business dedicated phone.

The E71 phone as well as E66, both the phones feature next generation features including HSDPA, wireless LAN and 3G connectivity. Up to 8 GB external memory, a 3.2 megapixel auto-focus camera, assisted GPS (A-GPS), Nokia Maps for navigation, integrated encryption functionality are some of the other attributes of the newly launched phones.

“The newly launched Nokia E71 and E66 are designed to enhance the way we work and increase productivity in our daily lives. They are meant for people who lead a mobile lifestyle and want quick and easy access to their personal and work email. With both of these devices, we have responded to consumer feedback by making calendar and contacts available at the touch of a button,” said Devinder Kishore, Director-Marketing of Nokia.