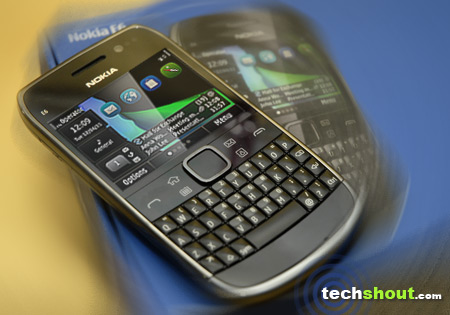 Though not many groove to the touch and type rhythm of Nokia, it isn’t a reason enough why we wouldn’t review the Nokia E6 smartphone. Non-arguably, the company hasn’t dished out the best touch enabled phones, so playing the touch and type game could probably work for Nokia. Some folks at our end, who have been using the Nokia E72, could quickly relate to the E6. In fact, the touch functionality seemed to have gushed in a beaming smile onto their faces. And for those who haven’t tested the waters or rather look forward to doing so, the Nokia E6 appears to be quite promising.

You wouldn’t debate over it being called a business phone, owing to the classy look that it adorns. The device could pop out of professional pockets with an all black, white or silver form. Our unit was dipped in sophisticated black alongside black and grey themes that merged in pretty well. Placing it next to the E71 and E72, the Nokia E6 smartphone shows a more refined look. It appears to be more polished with a glossy front, grey rim and smooth back. You will instantly notice the physical navigation buttons of its predecessors being replaced by touch ones while it retains the main square navigation button. 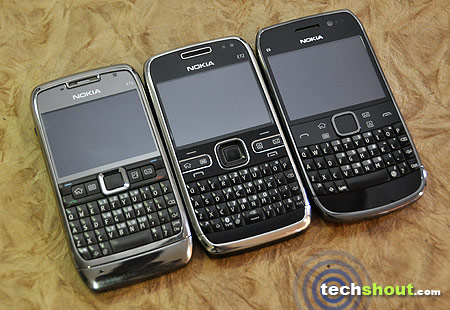 A 2.46-inch display has been embedded on the front surface and below it you’ll find the QWERTY keypad crafted out of plastic. The lower front side has been designed with a flat surface similar to the E71 with the mic taking its position on the right side. The company has upgraded the camera by integrating an 8MP sensor with dual LED flash. The sides of the handset take on the micro USB port, volume control and lock/unlock toggle. An average case, headphones and USB cable accompany the device along with user manuals. On placing it in our palms, the E6 feels sturdy to a great extent.

Be it videos or web surfing, the 2.46-inch capacitive touchscreen manages to deliver a decent viewing experience at 640 x 480 pixel resolution. As we tried to load it with some of our favorite videos, which wasn’t really space consuming with the 8GB internal memory which can be further expanded up to 32GB using the microSD card. 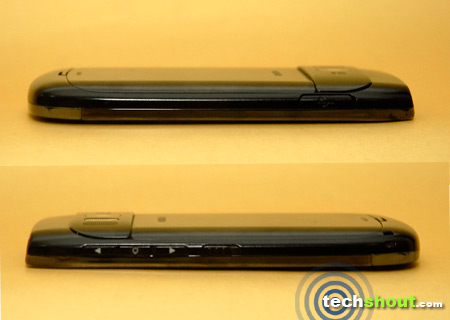 The QWERTY keypad with a slightly curved design at its bottom enables quick typing. The small plasticky keys ensure that your fingers don’t slip. On the other hand, navigation is made much simpler with the touch enabled home, calendar, messages and phonebook buttons. Moreover, the inclusion of the touchscreen cuts on multiple clicks and you can easily tap and swipe your way around.

The Nokia E6 runs on the latest Anna update of the Symbian platform. So, first thing we noticed was how visually appealing Nokia could get. And it has undergone some neat transformations starting from the icons which further add to the touch ability. You’ll find up to five homescreens to be stuffed with widgets which can be accessed through simple taps on the screen. The lower right and left sides of the screen maintain access to Menu and Options. 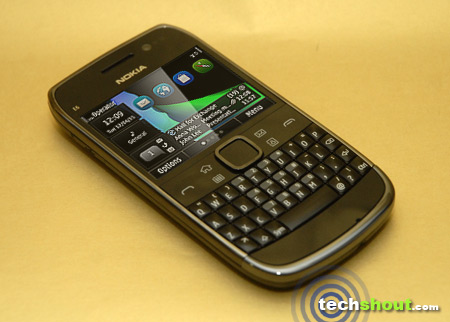 Although the E6 falls pretty much on the lines of its predecessors, the Symbian Anna has undergone overhaul, we must say. Despite this fact, the OS does not bring along too many customizing options and appears pretty cluttered at times. Nevertheless, the touchscreen along with the Anna OS bring in a lot of ease of use especially while navigating and handling the homescreen. The display responds effectively to touch gestures. Besides, the hardware set includes 680MHz processor and 256MB RAM which deliver a decent usability but not without a few lags and freezes.

The 8 megapixel camera with dual LED flash delivers average stills. The lack of auto focus adds in to the blurriness of close up shots. However, the device takes decent shots even in low light conditions comparatively. The camera options are spruced with scene modes, Face Detection, self timer, Light sensitivity, color tones, contrast and sharpness. While capturing videos, the handset lets you stretch up to 720p HD videos at 25 fps, yet again delivering average video quality. You can also lay your hands on editing tools like rotate, re-size and crop while adding some fun factors has been made possible with bubble text, effects, frames, stamp, and so on.

Web surfing comes with an improved browser which enabled quick email access. However, we can’t say the same while access websites. Page loads were sluggish and though it has been simplified with taps and flicks, the waiting time was a tad too much.

The Anna update ropes in the previous music player and you’ll find stereo FM radio with RDS. Tapping to those peppy tunes, the audio experience cant be called anything further than decent. In fact, try replacing the bundled earphones for better audio. The video player comes with support for DivX/Xvid files along with MPEG-4. The Nokia E6 smartphone also managed to play a short 720p clipping effectively. We didn’t take much time to connect to Wi-Fi while other connectivity options offered by the device include GPS and Bluetooth 3.0.

As this device further strengthens the Nokia’s business lineup, we weren’t surprised to see the E6 came with the complete version of Quick Office, Notes, Adobe Reader and more. Knowing that social media hasn’t left alone professionals either, the social feature takes one to apps like Facebook and Twitter. Another good tool worth mentioning is Nokia Ovi Maps.

The call reception has been handled pretty well and even in crowded surroundings neither the caller nor we complained. With average usage, the 1500mAh battery stretch well above one and a half day.

The striking design and overall look of the device slips it into the classy, good looking zone.

The inclusion of an 8MP camera, dual LED flash and a set of editing and fun options strengthen the spec sheet.

Although fitted with an 8MP camera with plethora of options, Nokia’s device lacks auto focus resulting into blurring of images.

A screen sized at 2.46-inch comes across pretty small for the ongoing smartphone trend. Moreover, it is a fingerprint magnet.

The Nokia E6 comes with several highlights to talk about be it its design, Anna update or 8MP camera. However, these upgrades come with a fair share of further improvements. The operating system isn’t as smooth as Android or iOS and Nokia’s profile of touch and type isn’t exclusive too. We’ve seen high-end Android devices with a large touchscreen leaving enough room for a slide-out QWERTY. Nevertheless, the E6 isn’t a mere passable device either, the complete package with decent touch functionality could attract existing Nokia fan following for sure. The price tag of the Nokia E6 smartphone reads an MRP of Rs. 18,679 and on our rating meter we just couldn’t go below 7.5 out of 10.