Nokia E52 Review: Strikes a Balance between Professional and Personal Use 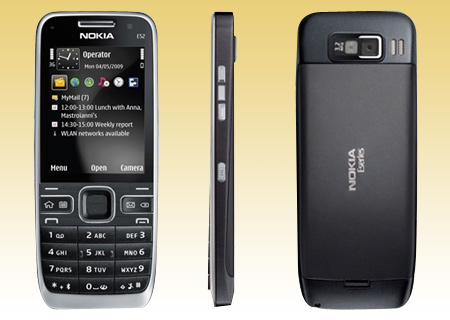 One can’t help but notice how the market these days is crowded with touchscreen phones. Whether it’s a business phone, a basic handset or just your average gadget, they are all designed to enjoy some finger canoodling. In what we’d like to believe is fast becoming a highly ‘touched’ world, a smartphone that doesn’t require you to put your fingers to test certainly comes like a breath of fresh air. And that’s just what we felt when the Nokia E52 reached us for a review. Appearing to pretty much stick to the company’s E-series phones, this handset sure had us intrigued with its no fuss tailoring. We can’t really say if the smartphone will have your heart set at it the first time you see it, there still seemed to be something alluring about it.

What we thought was surprisingly very small for a smartphone, the non-bulky presentation is actually easy on the eyes. The coffer we received packed in a microUSB charger, a microUSB cable, a set of 3.5mm headphones, a charger, a warranty card and the user guide as well. A bundled charging adapter for compatibility with both small and large pin chargers is worth mentioning too. An Ovi manual letting you know how well you can explore the service along with an Ovi Music Voucher offering 25 free tracks was also included. The phone was further assorted with a Nokia Holder Easy Mount HH-20 and CR-114/115.

The Nokia E52 sports a standard candy bar form factor with a fairly large screen. Clinging tightly to the Nokia family, the phone maintains the tall and slim profile identifying its older siblings. Below its 2.4” display are two soft keys with the square 5-way navigation pad in the center. The row below this features the home, calendar, messaging and backspace keys followed by the call answer and reject buttons with the keypad up next. Above the display is the front facing camera and the ambient light sensor and the left panel holds just the microUSB port for plugging in the charger. Turn the phone to your right and there are four neatly embedded metal buttons. These include the Volume buttons on either side of the Voice Activate button placed as a trio while the camera shortcut key is further down. The uppermost edge includes the power button, right next to which is the 3.5mm port.

Flip the phone over and a metallic back cover embossed with Nokia ESeries in bold is revealed. Engraved in an attractive pattern, the aluminum back chassis actually functions to keep the phone firmly in grip. This side also holds the 3.2 megapixel camera and in-built speakers. One glance at the Nokia E52 and its slim profile is almost deceptive, scoping at just 10mm at its thickest. And the compactness doesn’t seem to stop at just the sleek chassis, the weight of the phone is also readable at a mere 98g. Anyone who remembers Nokia Conversations musing over grip styles last month will only agree how the four-edge grip works best with this phone.

When we switched the phone on after inserting the battery and SIM, it popped up settings that suggest you customize the device much before you start using it. The idea is much friendlier than having to go into the control settings manually. For those who are familiar with Nokia phones, the interface is uncluttered and easy to dive into with a simplistic air about it. Nokia’s 3rd Edition of Symbian 60 incorporated in this phone plays up with just a few minor changes. A closer peek reveals that a slight nudge on the left of the D-pad offers shortcut options to certain functions. Like in Contacts, it leaps out voice call, send message and send audio msg while in Gmail relevant additives like Reply, Forward, Delete and others appear. It’s more like using the right click of a mouse and actually saves on time as you don’t have to go through all the other options.

Download and installation of the chat IM client was super fast and the service was up and running almost instantly. The client includes Google Talk, Messenger, Ovi and Yahoo Messenger. We chose to set up Google Talk which comes complete with attributes to change your status or work through other functions. Those high on connectivity will be more than satiated with the browsing experience on this phone. The Keypad shortcut option assigning each number of the keypad to a particular function for browsing is a thoughtful inclusion. In fact, once you get used to the browser, simply keying in a particular number will allow nifty web navigation. Alternatives include moving to a new web page, bookmarks, settings, zoom and full screen. Page loading is super fast and the 600MHz processor makes sure you have no complaints. We used Wi-Fi connectivity and the browser support is pretty good for a non-touch device. The screen, however, did blink weirdly a few times when we moved between various pages while browsing the internet.

Detailing the QVGA display, it boasts of a high resolution amounting to 320 x 240 pixels reflecting Nokia has done well on this front. The screen’s much larger dimensions in comparison to most phones this size only adds to the visual treat. With bright and vivid exhibition of content, the screen will surprise you on how well it’s optimized for not just multimedia but also web browsing. It’s close to netbook experience when you’re surfing the web as pages loaded are crisp and bright. The active display on the homescreen can be customized to feature frequently used tools. Right on top of the screen are six different shortcut icons which again can be personalized as per your preference. Typical of Nokia business phones, the switch mode attribute lets you easily move between your personal and business homescreen.

Business users will appreciate the phone’s handling of emails. With our Gmail account set up, the Nokia E52 phone kept us updated while composing and sending a message too is very simple. It’s neat, quick and you can continue doing other things on the phone as the message is queued up to be delivered. It also bundles in a respectable calendar and messaging support and the former can be synced straight with mail. You can even sync contacts with email. While we aren’t great fans of the non-QWERTY input system, if you are comfortable with the keypad, typing in web addresses, updating your Facebook status or simply writing a message should be effortless.

Though primarily the E52 is a business device, it is equally good at handling entertainment and media attributes. The included camera is a 3.2 megapixel fixed-focus one and though it’s not an ace, it does have a couple of regular features. The fact that you can’t use the central key to snap images and must use the dedicated camera knob on the panel could get annoying. With the regular scene modes thrown in, it also features a self-timer, a panorama mode, a Flash mode, a Sequence mode and the options to reach the Photo Gallery straight from the camera interface. Videos are played in the integrated Real Player and the video light can be switched on or off while recording. If you must toy around with the video, you may consider tweaking the white balance or the color tone for better quality. We noticed the phone took quite some time to shift from the camera interface to the homescreen.

Moving to the music player, it does score better on our cards in terms of both audio quality and sorting of files. Couple it with the headphones or use a stereo Bluetooth headset courtesy the Bluetooth A2DP profile, and you’re certain to awake your aural senses. While you can search a music file using Voice commands, the Ovi Store can also be used to acquire more content. Playing music through the Ovi store is not something you may want to indulge in and you might as well download it which is quicker. The Office feature in the main menu shows the phone is as smart as it could get, especially if you’re using it mainly for professional reasons. Be it creating a workbook, a presentation or a document, it’s effortless and the plethora of customization options in these should let you create files at your discretion. If you do choose to keep most of your personal and business data in the phone, we’re not really sure if the included 2GB card and 60MB of internal memory will suffice.

Your regular Phone Settings option has been replaced with the Control Panel giving it more of that desktop-like feel. The Applications section moreover packs in GPS, Voice Function, Ovi Files, Traveler, Home Media (for easy syncing between a home PC or server and it’s a good one at that), PTT and Messenger. Solitaires and Block Cascade Fusion are the two games included to keep you busy during boring trips. The GPS function works fine and much unlike other smartphones is easy to operate offering roads, landmarks and maps. The World Traveler application should be handy for frequent roadrunners with features that can make trips simpler. Maps, Weather, a world clock, Currencies, Flight services and travel plan (that says coming soon) and globe indicating various locations are included. A good three days is what the phone offered us in terms of battery juice when used moderately. Nokia backs that up with claims of 8 hours talktime which again is very good for a smartphone packing in the kind of functionality it does.

Nokia’s inclusion of the charging adapter with varying pins is a very thoughtful gesture.

Social networking buffs and Internet users in general will be more than pleased with the web navigation experience.

Those with large fingers might have a problem with the D-pad. It’s a bit uncomfortable and you might just end up pushing the side function keys.

Images by default are opened in the landscape mode, though you can rotate them to the portrait mode.

Nokia could have added a better camera.

For those familiar with the Nokia E50 portfolio, the phone’s striking resemblance to the E55 can’t be missed. The principal dissimilarity between the two handsets seems to be their keypad. While the E55 is infused with a half QWERTY keypad giving it more of that smartphone feel, the E52 comes with a conventional alpha-numeric one. But don’t mistake the latter for your run-of-the-mill phone as quite early on we realized there was much more to the device. It did seem after all that making a choice between the two phones would rely mainly on your preferred text input system.

As a business device the Nokia E52 is certainly above average and it isn’t disappointing on the multimedia quarters too. Well, superior email capabilities, office support and a nifty browser should turn around some heads. Those who’ve stuck by the Nokia E-series portfolio ever since it came into being we’re sure will only agree. We mark the phone at a good 9 out of 10.