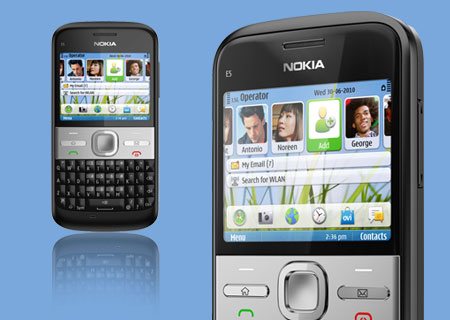 Even as we’re moving to a very tablet-ized world, it doesn’t take a smartphone ingeniousness to remember how Nokia wowed one and all with its Nokia N900 series phones in the early nineties. And that might we add was when the specific category of mobile phones was still in a very nascent stage. While we’ve seen a host of other manufacturers jumping onto the fast moving smartphone bandwagon since, Nokia still manages to hold its own. It was April 2010 when the company grasped attention yet again with a trio of devices namely the C3, E5 and C6. For your pleasure, the Nokia E5 in particular was painted in a choice of exciting colors from the palette – carbon black, chalk white, sky blue, copper brown and silver gray. We’ve had the opportunity to run through the sable smartphone over the past couple of days and whip it all up in this review.

There was nothing out of the ordinary about the box that packed in the Nokia E5 with the familiar bright blue color staying put. The bundle included a charger, headphones, a USB cable, user guide and a messaging pocket guide. We aren’t sure if it was the dapper black color our unit was dressed in or just a sincere attempt by the company, but at a first glance the E5 looked way too similar to the BlackBerry Curve. The aesthetically elegant handset retains its E-series lineage though and has approximately the same proportions as other phones in the lineup. It is however noticeably at least 2mm flabbier than its siblings while happily being lighter on the weighing scale, having dropped a whole 2gms of extra bulk. Though meatier, the smartphone is anything but an eye-sore and mighty pleasing to look at. We’re almost certain professionals will appreciate its all-matte finishing which though plastic is chic.

On the facial side, the Nokia E5 phone has been fitted by a wide-looking 2.4” screen, right below which in a dedicated area colored silver are the shortcut knobs. With a duo of hot keys for homescreen and messaging in here, call dial/receive and end buttons are also featured. In the central area, there is a 5-way navigation key and the phone’s edges are minimalistic with each side having the battery lock tab in the lower area. The upper portion of the right rim also bears the volume control buttons while the topmost edge houses the 3.5mm earphone and the charging port. The battery flap on this phone is a nice silver shade scribbled with the words Nokia and E5-00 on it. The 5MP snapper is fitted on this side and has the speaker grill appearing right next to it. We liked how Nokia has been very vocal about its references for the E5. The company shares to have taken a helping hand from its earlier E-series stunners, the E71 and E72. From the looks of it, we comprehend this handset to indeed hold some of the best features of both these devices.

The Nokia E5 phone is powered by the most recent version of the S60 3rd edition which comes to life almost as soon as you start the phone. You can begin by customizing the homescreen and the phone in general as per your fancy. There are 6 homescreen themes among which we liked the talking theme and the contacts bar the most. From choosing the desired theme to changing the applications for which you have shortcuts on the homescreen, there’s much that can be done. As we tweaked the left and right selection key to hold functions of our choice, we could also alter the long press and short press operations of the committed Messaging key (Messaging, Calendar, Msg reader are some of the options included). The lower area of the homescreen can be added with up to 6 shortcuts. What left us a bit disappointed during personalizing the phone though was the fact that there is a fixed list of homescreen applications and you are compelled to pick from among Calendar, WLAN, Contacts on Ovi and Contacts bar. 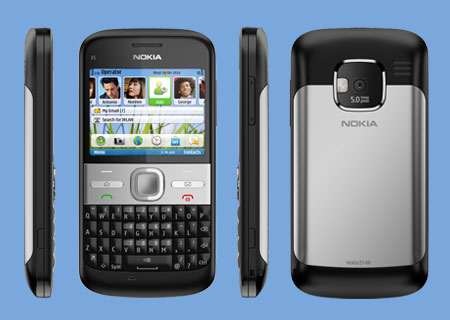 For those who rely largely on text messages and emails, the phone has a full QWERTY keypad that offers a close to perfect typing experience. The keys are just the right size with optimum space in between for a responsive and tactile feedback. What’s more, they don’t require hard presses and register gentle touch aptly too. The Sym and Ctrl keys on the lower row get a shortcut to Bluetooth and Silent profile respectively. For business professionals on the move, Nokia keeps it rather smart and easy. Users can benefit from QuickOffice, Email, Notes, File Mgr, support for PDF and Traveler among other features. Nokia could however learn a thing or two from Android about the ease of setting up an email account. Though it’s simple, the phone does take much more time in comparison to the ‘bot’ platform. The ‘Options’ feature in all the menu attributes can be used to view the list of open applications.

Moving on to the web navigation experience we had with the E5 phone, seamless and smooth sailing is an apt way to describe it. The screen has been optimized well for surfing the internet and the fact that it’s wide only makes it all the more pleasurable. There are dedicated applications for social sites like Facebook, YouTube and Twitter which are effortless to reach. With pages loading fast and rather crisply, you can multitask without worrying about a lost connection. Nokia also doesn’t forget its familiar keypad shortcuts feature that simplifies the task of browsing through the web. The 5MP snapper fitted on this handset held our attention next. There are a dozen or more editing options to not just capture but also enhance the arrested moments. It’s almost like a mini digital camera interface. Sadly, the quality of both videos and still images doesn’t live up to all those alterations that can be made and is nothing to write home about.

On the application front, Nokia’s own Ovi store is well within reach and effortlessly proffers a wide array of content. The Nokia Ovi Maps feature too is upfront about location sharing and searching. Vlingo-Voice, Msg.reader and Font Magnifier are among the various applications that are preloaded on the phone. Multimedia enthusiasts are rest assured about audio quality as both the earphones and loudspeaker does its job well. What had us complaining with media files though was the 250MB of on-board memory. Of course you upscale the memory using the microSD card slot to a maximum of 16GB, but phones with multimedia capabilities we think should come with much more memory or at least have the memory card bundled in. It’s been a couple of days and we haven’t reached out for the charger just yet. So yes Nokia’s claims of having the battery life as a highlight on this phone do justify.

The QWERTY keypad on this phone is by far its biggest high-spot.

If you’re tired of the charge every night ethos common with most smartphones, the E5 ensures you aren’t disappointed.

Web-navigation is a breeze and the screen though small is wide enough for a joyful internet ride.

The screen isn’t at its best behavior in bright light and is rather hurtful to the eyes.

There’s more than a noticeable lag in processing of content.

We’d love to see Nokia add some oomph factor to the appearance of their E-series handsets.