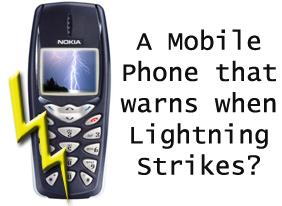 Scientists at Nokia have developed software that transforms a mobile phone into a signal receiver and warns the user of an approaching lightning strike.

Basically, a lightning bolt is an electric current that emits radio waves, which each bolt producing frequencies between 10 hertz and 5 gigahertz. However, the distribution of these signals depends on how far away the lightning is.

According to the scientists at Nokia, the multiple receivers in a phone, such as Bluetooth, FM, tri-band GSM, Wi-Fi and RFID, can be tuned to pick up these signals.

The newly developed software then interprets them, works out the distance to the lightning, and tells the user if the lightning strikes are getting closer.

Since lightning can be a major risk to people taking part in outdoor activities such as golfing, jogging etc., the software could become an indispensable safety device for outdoor enthusiasts.