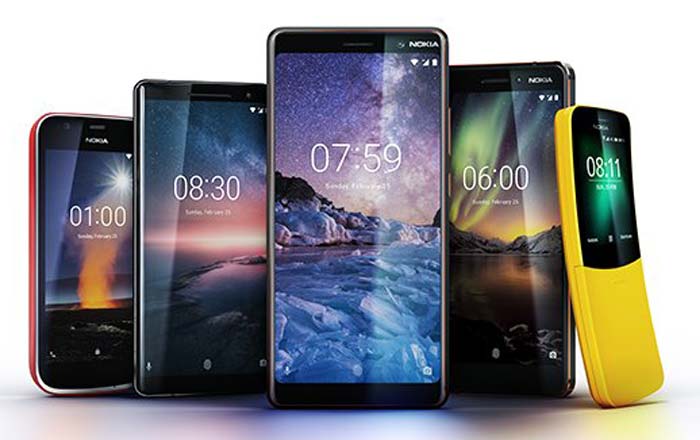 HMD Global’s making something for everyone at the MWC 2018, launching 5 new phones which span a wide range of categories. There’s the premium Nokia 8 Sirocco, mid-range Nokia 7 Plus and Nokia 6 (2018), low-cost Nokia 1, and nostalgia machine Nokia 8110 4G. All except the last are part of Google’s Android One program which combines stock software with 2 years of OS updates.

Starting things off with HMD’s new flagship, the Nokia 8 Sirocco is priced at EUR 749 (roughly Rs 59880) and will go up for sale in April. At its core, the handset is an upgraded version of its previous variant with some serious improvements. For instance, the bigger 5.5-inch QHD screen now curves on both sides and boasts of pOLED technology.

3D Gorilla Glass 5 slopes around the front and back of the Nokia 8 Sirocco, with the device itself made out of a single piece of stainless steel. The company’s used 3 integrated microphones for spatial audio that features high dynamic range with 24-bit sound and a 132 decibel limit. All this is supposed to ensure clear audio without distortions even at loud concerts.

The other big news is the arrival of the Pro Camera mode in the default camera app. It’ll make adjusting settings like ISO and white balance much simpler when clicking photos through the 12MP wide-angle and 13MP telephoto Zeiss rear lens. The Nokia smartphone has also been upgraded with support for wireless charging and IP67 certification, but keeps the same Snapdragon 835 processor.

Moving on to the Nokia 7 Plus, the device costs EUR 399 (approx Rs 31870) and will hit stores in April. While the Nokia 7 never made it out of China, its Plus variant makes up for its absence with a Nokia-first 6-inch 18:9 FHD+ display. The new variant has been constructed out of 6000 series aluminum and has a ceramic-esque finish for better gripping.

The design also makes sure there aren’t any antenna lines in sight. The Nokia 7 Plus adopts a 12MP + 13MP dual camera setup at the back with the same Pro mode as the Nokia 8 Sirocco. The same 3-microphone setup is found here as well. The SoC is of the Snapdragon 660 variety though.

The tiny Nokia 1 lies at the bottom of the Nokia phone hierarchy with its $85 (around Rs 5500) cost. It’s coming to markets around the world starting from April with the power of Android 8.1 Oreo (Go edition) behind it. The software is a stripped down version of the OS and comes packed with less resource-intensive versions of Google apps like YouTube Go and Gmail Go.

The idea is to provide a full-fledged 4G-ready Android experience on basic specs like 1GB of RAM, a 4.5-inch FWVGA display, a 1.1GHz quad-core MT6737M chip, and 8GB of expandable ROM. The plastic shell can be swapped for new colors at $7.99 (roughly Rs 520) a piece.

Finally, the Nokia 8810 4G has been reimagined for the modern era. The curved feature phone still has a sliding cover design which can be slid on or off when picking up and ending calls. But it now has access to 4G connectivity and the KaiOS-based Smart Feature OS, allowing apps like Facebook and Twitter to run. Snake has been preloaded as well, making the nostalgia overdose complete.