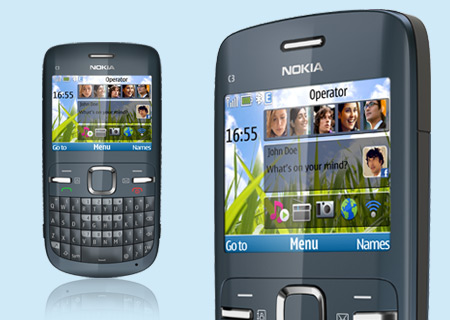 Nokia strode down the tech ramp flaunting different models that differ just a little from each other. All these offerings however have an individual spark that catches the eye and hence makes you want to take that particular one home. The Nokia C3 mobile phone is one such gadget that grabs user attention with its various components. On indulging in a review of the product, we found the handset to contain some fresh attributes, right out of the oven while the others brought back quite a few dollops of nostalgia.

The Nokia C3 came to us packed in a box that was adorned with the picture of the handset in question. On opening the treasure chest, we found all the components necessary for getting the mobile up and running, along with the gear to groove. In simple terms, we mean the charger, headphones and user guide. For starters, it actually looked like a dummy set on display as the first thing that caught our attention was its lightweight attribute. The device tipped the scale at just 114g and sported a slimmed down look complimented by a big 2.4 inch 320 x 240 pixels ‘squarish’ display screen which was observed to be one of the phone’s main highlights. We could just imagine how content would appear through these peepers.

Although our review model was drenched in a subtle slate gray color, mobile aficionados can also avail of the device dressed in two more attractive hues namely hot pink and golden white. While half the frontal area was occupied by the screen and speaker outlet flanked with the Nokia and C3 logos, the other half was dominated by the QWERTY keyboard. One downside however was that the keys looked as if they were too cluttered on our review model. The individual buttons were adorned with Hindi and English alphabets along with numbers on a few of them; all marked down in a light grey shade. We felt that the amalgamation of the background grey hue as well as light shade contrasted in a big way only to emerge as confusing especially for those who can’t type without looking at the keypad. It even gets a bit troublesome when trying to dial a number. Although they are boxed in a slate-colored small square, it still isn’t bright enough to be spotted at a glance.

Above the actual keypad was the four-way square navigation button with three buttons on either side which can be personalized by the owner, making it extremely easy for quick navigation. The third set of buttons on either side is for call and disconnect operations. Turning the Nokia C3 on its underbelly, the 2.0 megapixel camera could be seen with a small outlet for the speakers sitting next to the lens. The battery cover sported the embossed Nokia logo with the C3 name at the bottom. Unlike quite a few other handset battery panels, we didn’t need to fumble too much in order to insert our SIM card or access the mAh Li-Ion battery housed within. The edges of the mobile concealed two switches on each side which seamlessly release the back panel. The left rim comprised the USB and memory card slots while the right side was left untouched. 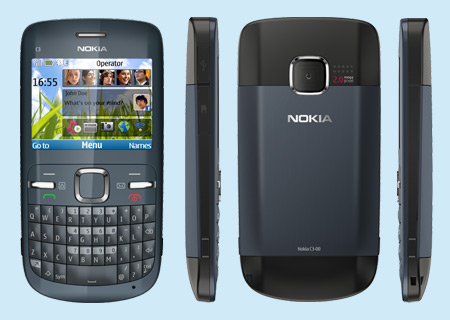 After charging the Nokia C3 till it was all juiced up, we attempted to indulge in all the features it had to throw at us. For starters, the Home Screen was definitely not of the complicated kind and in fact it made connecting to all our favorite applications easier. This aspect too could be changed to our preference by altering the theme, background and icons. We could opt from various built-in backgrounds, themes or even add some of our own. An innovative feature sits atop in a neat strip that can accommodate selected contacts of friends and family. Their picture appears on the blank space from where you can either pass them an SMS or give them a call. This is reserved for gaining quick access to all your close friends and family members. All other frequently used options such as e-mails, calendar, music player and more are strewn across strategically on the home screen for easy acquiring. Message enthusiasts with itchy fingers will adore the inclusion of the Conversations view which gives them the ability to see all the notes that went to and fro in a neat speech bubble type format. A disadvantage here however seems that you cannot delete various SMS entries at one go by simply tagging them. You can only erase them in bulk through the ‘Delete Message’ option.

If just a call or an SMS do not suffice, that’s when other connectivity options come into play. Web on-the-go is provided with Internet on 2G and Wi-Fi. All online content could be viewed with clarity on the large screen although we faced quite a lag while trying to access some web pages. As a matter of fact, a stutter was observed while going through photos from the allocated files. Well, so much for an intuitive interface. Although the features housed within this handset are pretty vast and popular, the lag at times gets you a bit frustrated. Moving on to some fun things the Nokia C3 offers, we find the music-centric options standing up tall, providing users with radio, My music, and media player options. We gathered songs from our PC and friends through USB and Bluetooth respectively. When heard aloud, the songs seemed to have a very ‘jarry’ feel but when paired with the headphones, the sound quality was quite superb. It supports up to 8GB MicroSD cards and hence could accommodate a lot of videos, photos and music. But then again, we were compelled to think twice before filling it to the brim as it started to hang as the limit approached.

Appealing to shutterbugs is the 2 megapixel camera that has a zoom capability of up to 4x complete with self-timer, fullscreen viewfinder and various effects that comprise sepia, grayscale and negative. While accessing video camera capabilities, we were spoiled for choice with settings such as video light, color tone, white balance and scene. It was indeed a delight to view all videos and pictures on the elaborated screen. As far as games are concerned, we could kill quite a few hours with included titles such as Bounce Tales, Diamond Rush, and Sudoku. We felt that the company could have infused more built-in games into the phone but nonetheless, these offerings certainly cater to owners with different genre taste buds.

One of the main features sported by this phone includes the slapping on of a QWERTY keypad.

Through the large 2.4 inch screen, all content and data could be easily viewed with top clarity.

The C3 is tagged with an affordable price.

The interface lagged quite a bit especially while accessing photos and the Internet.

Nokia could have endowed the phone with higher megapixels.

One would not be called a total square for not purchasing this handset but it does feature innovative, fun and easily accessible attributes that can however fulfill the fantasy of possessing a QWERTY keyboard and cool functionalities at an attractive price. The battery life seemed decent enough as it lasted at least a day on full charge. During these 24 hours, we indulged in online and SMS conversations as well as phone calls and listened in to some local FM channels while jiving a bit to our installed tracks later. What gets us adorning our party hats and getting out the whistles for the Nokia C3 is the innovative features and price tag of just Rs. 5,999 that comes affixed to it. We give this Nokia device an 8 out of 10 rating.