The Nokia Asha 502 which is codenamed Pegasus had shown up on the internet quite a while ago, but the smart-feature phone has now been leaked in its full glass-coated glory. And if this picture is anything to go by, then the stylish device will be made available in multiple shades such as black, white, yellow, magenta, cyan and green.

It is none other than @evleaks who has uploaded the press shot on the web and as you may have noticed, the time on Nokia phones’s snapshots usually gives the models away and the image in question today is no exception. Thus, we can confirm that the gadget seen below is actually the rumored Asha 502 which plays successor to the very popular Asha 501. 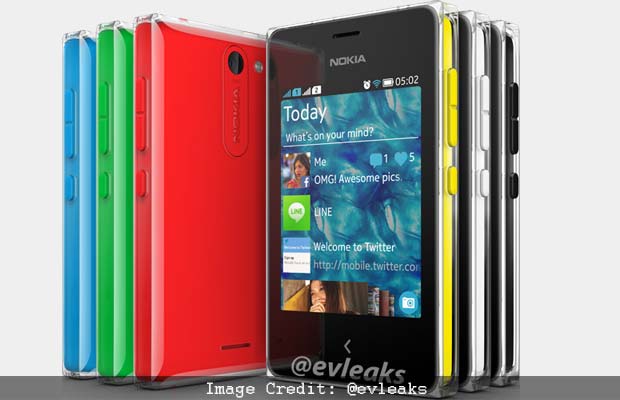 And those of you are contemplating buying the gadget when it is out will be glad to know that the Asha 500 and Asha 503 are also gearing up for their arrivals. The latter has been nicknamed Lanai, but of course, there hasn’t been an official announcement regarding any of these devices.

Previous reports have indicated that the Asha 502 will have a touchscreen measuring anywhere between 3.2 and 3.5 inches with a Corning Gorilla Glass film on top. It is capable of rendering visuals in 360 x 640p resolution and employs a 5MP camera as well. Moreover, the 3G-enabled device may feature dual SIM card slots and will be powered by a processor clocking a speed of at least 1GHz.

All the other details regarding the Nokia Asha 502 are currently under wraps, including its pricing and availability information.

Facebook
Twitter
Pinterest
Linkedin
ReddIt
Tumblr
Flip
Previous articleYou can now grab the Z10 and Q10 from BlackBerry’s online store in the US
Next articleComing soon to India: HTC Desire 500, a cheaper alternative to the 600