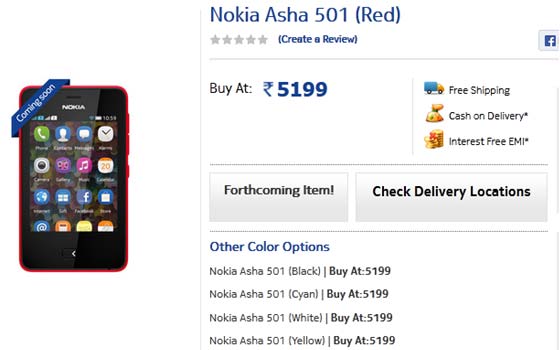 The Nokia Asha 501 which has introduced a complete overhaul to the feature phone series has gone up for pre-order in India with a coming soon label attached to it. The Nokia handset made its global launch in the country last month and it comes with a redesigned OS that’s said to deliver an enhanced user experience which is similar to that of a smartphone.

The Nokia Asha 501 isn’t like the previous touch-enabled feature phones such as the 308, 309 and 310 from the Finnish manufacturer, in appearance and software. The device is basically the first addition to run on a fresh mobile OS which is branded with the same name as the series. It flaunts a full touch design with just one hardware key, a back button, fitted below the display.

The Nokia Asha 501 is Lumia-like in appearance. While being on the bulky side at 12.1mm thick, the phone is light weighing 91 grams. It sports a 3-inch QVGA display which is coated with a scratch-resistant glass. On the inside, buyers will find dual SIM card slots, 64MB of storage, a microSD card slot supporting 32GB, Wi-Fi 802.11 b/g and Bluetooth 3.0 radios, as well as a 1200mAh battery with a whopping 17 hours of talktime or 634 hours of standby.

What’s disappointing is that the Nokia Asha 501 doesn’t have 3G support. The rear dons a 3.2MP camera which can record videos at 15fps. Where the new platform is concerned, the UI is designed with 2 screens, namely Home which has the traditional icon layout, and Fastlane that displays content like recently accessed contacts, social networks and apps amongst others.

The Asha 501 is currently available for pre-order in the country through the company’s online store for a price of Rs 5,199, as well as e-retailer Flipkart that’s offering the phone at Rs 100 more. The device is listed in color options of red, black, cyan, white and yellow on both websites. The company has also announced that the handset will go on sale in Thailand and Pakistan this week with many more locations to follow.