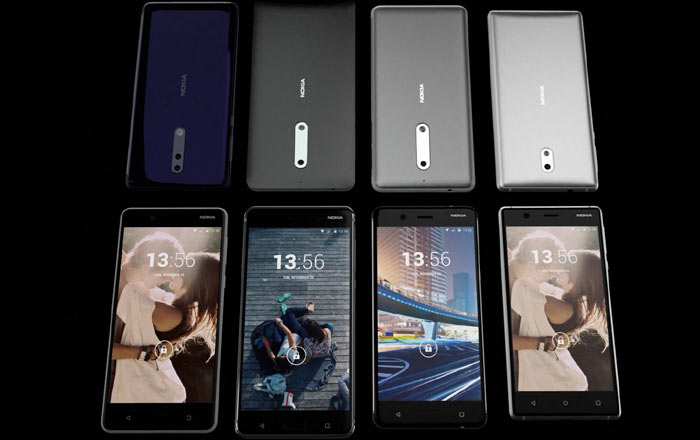 A new video depicting 4 Nokia smartphones has popped up online, offering a glimpse at what the brand might be cooking up for the rest of 2017. Serial leakster Evan Blass claims that the clip was posted by a longtime photographer for the brand who is now working with HMD Global.

The video was initially uploaded to Vimeo but got pulled later, though it can be seen below courtesy a mirror upload by Blass on Twitter. The tipster suggests that the removal might mean that the 39-second clip is legitimate and contains actual depictions of Nokia’s upcoming slate of phones.

HMD Global has so far unveiled 3 Android-running devices namely the Nokia 3, 5, and 6. The first two can be seen on the right, so no surprises there. Things get interesting when looking at the devices on the left. The one on the extreme end features dual cameras, leading many to believe that it’s the long-awaited flagship Nokia 9.

This will surely get pulled at some point, so I'll mirror it here [source: https://t.co/37yp63CAeC] pic.twitter.com/GktpXnt4pS

The Nokia 9 has been through many name changes, but the phone at center of all the rumors is predicted to carry a Carl Zeiss 22MP twin shooter setup, Android 7.1.2 Nougat, a Snapdragon 835 processor, 12MP selfie lens, a 3800mAh battery, 64GB or 128GB of ROM, 6GB of RAM, an iris scanner, 3D OZO Audio technology, and a 5.5-inch QHD OLED screen.

The other device seen next to the alleged Nokia 9 could be the Nokia 7 or 8. It probably isn’t the Nokia 6, but it’s unclear which number the company plans to christen it with. Both the possible candidates are expected to be mid-rangers which run on a Snapdragon 660 SoC. Differences include the 7’s smaller 1080p panel and the 8’s larger QHD one.