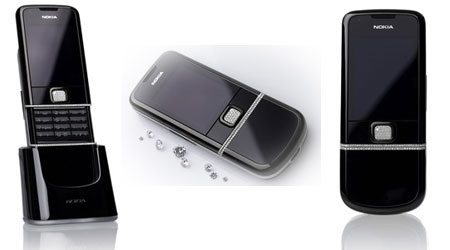 Luxury phones have become a well know name in the mobile industry, right from Diamonds to Gold to Platinum have been worn by the mobile phone. Nokia 8800 revamps itself with its Diamond Edition Phone which will present itself in a limited form.

In its sparkling glory, the Nokia 8800 presents its 112 diamonds over its sleek body. The Phone designed by Oslo-based Norwegian jeweler Thomas Heyerdahl, the Nokia 8800 Arte shines in pride and the majesty of its diamonds. Nokia is proud with the Nokia 8800 being the first phone to be embedded with real diamonds. Only 100 limited phones will go up for sale which can fit the pockets of the wealthy and rich who can afford a price of 30,000 NOK which converts to a huge sum of $6000 USD.

The phone also bears Fine-pitched screen protected by scratch-resistant glass window which ensures that the phone’s glossy touch doesn’t fade with the ugly scratches. The phone also features an out of the box silencing mechanism which can be activated when the phone is turned over, screen-side. The Nokia 8800 Diamond Edition phones are up for sale through Heyerdahl’s stores and if you have heard the line “Diamonds are the Girl’s Best Friend”, then think again for a whopping price of $6000 USD.