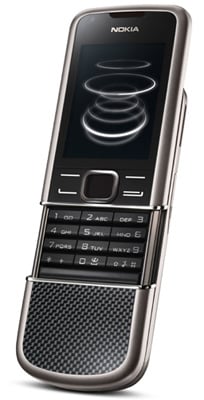 Nokia has announced its 8800 Carbon Arte premium mobile phone, which is expected to hit the market by Q3 of 2008. Like the earlier phones in 8800 range, even the latest phone possesses a elegant design. Its exteriors are made of carbon fibre, titanium, polished glass and stainless steel. Further the Nokia 8800 Carbon Arte features 3D patterns expressing the inherent performance.

The Carbon Arte 8800 sports a slider mechanism which makes a fashion statement. The phone features minimalistic and seamless surfaces. Moreover, it comes bundled with soundtracks and wallpapers created exclusively for Carbon Arte 8800.

Talking about the functions of the phone, the 3G capable Nokia 8800 Carbon Arte incorporates a 3.2 megapixel auto focus camera with OLED display. Built-in memory of 4GB and anti-fingerprint coating reducing smudges on metal and glass are some of the bonus features of the phone.

Apart from that, the phone also boasts turn-to-mute silencing mechanism, which allows users to silence incoming calls quickly and in a discrete manner by turning the phone over, screen-side down.

Nokia 8800 Carbon Arte phone is expected to be available at an estimated price of EUR 1,100 exclusive of subsidies and taxes in the Q3 of 2008.