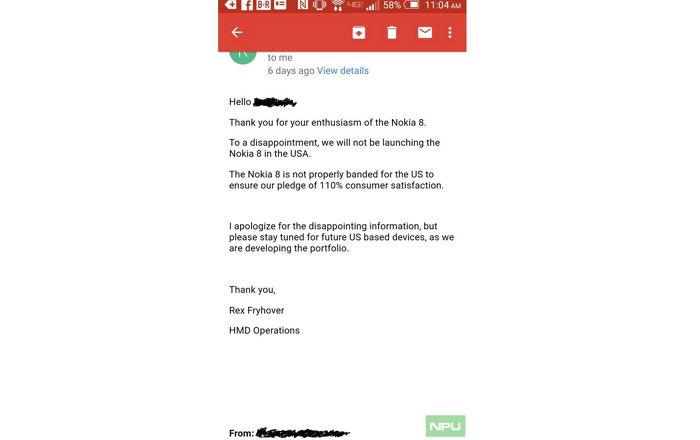 The Nokia 8 passed by the US FCC last month, sparking hopes that the handset would be getting launched in the country soon. However, it seems HMD Global has different plans as a recent email exchange confirms that the handset won’t be making its way to the nation.

In a screenshot sent to Nokiapoweruser, HMD US’ head of sales Rex Fryhover tells a user that the company won’t be unveiling the Nokia 8 in the US. The smartphone apparently isn’t properly banded for the market. He then apologizes for the disappointment and asks him to stay tuned for more information about future US-based devices as it’s developing that portfolio.

The email is littered with a couple of grammatical mistakes, so it can’t be taken at face value just yet. The Nokia 8 is prominently featured on the brand’s US website along with the Nokia 6 right now. It’s possible HMD Global changed its mind at some point and decided against releasing the phone in the country.

If the email is authentic, it seems there won’t be a 6GB/128GB storage model of the Nokia 8 making its way to the US as was suggested by the US FCC. Perhaps the brand plans to relaunch the phone under a different name or as hinted at above, start from scratch on a US-specific portfolio.

The Nokia 6 is currently the only device from the firm’s stable to have arrived in the US so far. The Nokia 3310, Nokia 3, and Nokia 5 haven’t made the trip yet. Maybe the company is waiting to launch the Nokia 9 and release that instead of the Nokia 8.