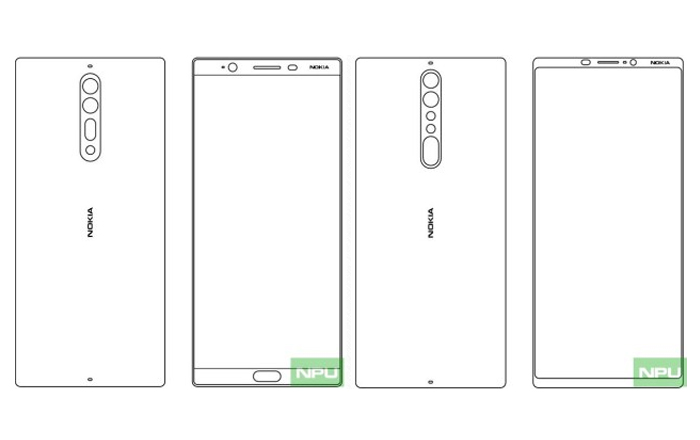 The Nokia 9 has popped up again for another round of speculation, this time accompanied by the Nokia 8 as well. Purported sketches of both handsets have come to light recently, alongside a pretty realistic artist’s conception of what the finished product could look like.

The freshly leaked images are fairly different from earlier drawings which came out of China last month. The phone on the left is supposed to be the Nokia 8. If accurate, the handset could be blessed with a tall rectangular screen featuring minimal bezels along the side and narrow strips at the top and bottom.

The lower half makes room for an oval home button which will presumably double up as a fingerprint scanner. There seems to be a dual camera setup on its back. As for the device on the right, it’s apparently an outline of the Nokia 9. The flagship phone goes for a Galaxy S8-esque look, cutting down on bezels even further to increase the display’s footprint.

This encroachment seems to have eaten up the home button. As a result, the fingerprint reader has been shifted to back below the twin shooter module. Previous reports have claimed that Nokia plans to add an iris scanner to the device, and there does appear to be one next to the selfie camera in these sketches.

Nokiapoweruser claims that the Nokia 8 has a 16:9 aspect ratio and the Nokia 9 an 18:9 aspect ratio, the second being similar to the Galaxy S8 and LG G6. Interestingly, a concept artist named Phone Designer recently uploaded a few renders of what he thinks the 9 might look like, falling closely in line with the above sketches.