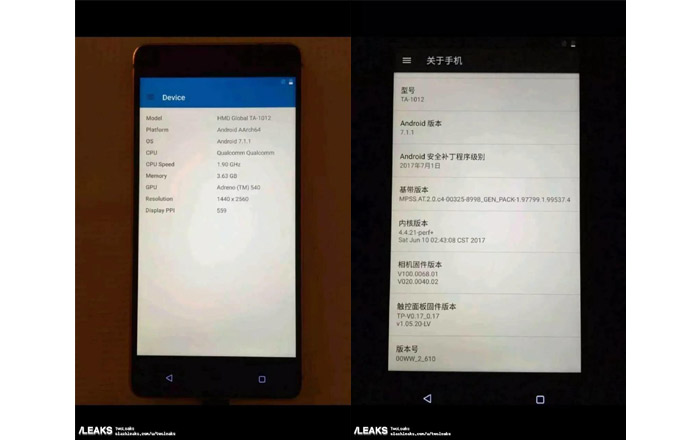 The Nokia 8 has frequently popped up on benchmarking websites in the past, showing up under the model numbers TA-1004, TA-1012, and TA-1052. Now a couple of live images out of WeChat show off those benchmarks on a working unit of the TA-1012.

The information revealed in the leak mostly lines up with previous rumors concerning the Nokia 8. There’s a 1.9GHz Snapdragon 835 processor ticking away at its heart, while 4GB of RAM and an Adreno 540 GPU make sure processing is smooth. The screen size isn’t detailed here, but the display ppi of 559 suggests that the panel will measure 5.25-inch diagonally.

That’s a bit smaller than the 5.3-inch hinted at before, but not by much. In any case, the Nokia 8’s screen will probably offer a resolution of 1440 x 2560p. 13MP cameras are probably making their way to the front and back of the smartphone, with both capable of capturing UHD 4K video.

Sadly, the Nokia TA-1012 runs on Android 7.1.1 Nougat. This would normally be a positive point, but a recent benchmark listing hinted that the flagship phone might be the first to run on Android 8. This could still happen on launch day since the OS should be out by then.

The hands-on photos don’t offer much in the way of design details since they’re quite blurry. Thankfully, it seems Nokia itself has provided a good look at its upcoming device. The brand recently uploaded a video to celebrate International Cat Day. The handset in the promo doesn’t look like any Nokia offering which has come out so far, leading some to conclude that it’s the Nokia 8.

The Nokia 8 is set to be unveiled on August 16 in London. It’ll probably be arriving alongside the Nokia 2 and a 3G-ready version of the Nokia 3310.