Nokia’s finally gone ahead and shown off its flagship phone to the world after months of leaks and anticipation. As expected, the stock Android handset is indeed called the Nokia 8 and it’s setting itself up as a worthy rival to the Galaxy S8 and iPhone 8’s of the world.

The Nokia 8 is a bit more affordable as compared to those two, but it still comes in at a hefty EUR 599 (roughly $706 or Rs 45320). Its metal unibody has been constructed out of 6000 series aluminum and features a unique heat management system that uses a copper pipe with a graphite shield to make sure heat is dissipated evenly.

HMD Global is placing a heavy emphasis on a photography tool called Dual-Sight. The mode lets users shoot from both the front and back cameras simultaneously for split-screen photos and videos AKA Bothies. It’s not a bad idea, though there is the question of the disparity in quality since rear cameras are usually better equipped than the front. 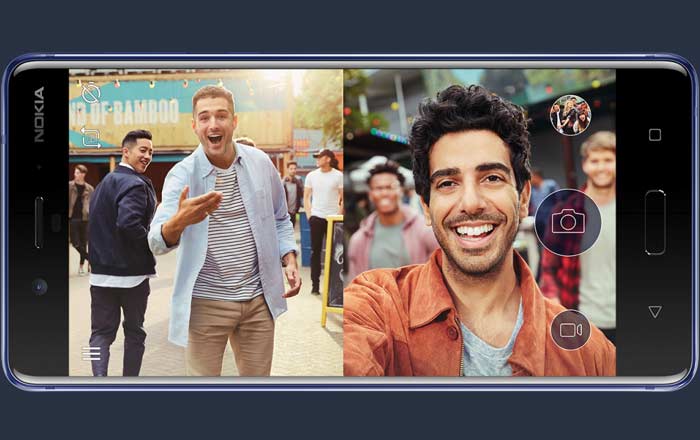 In the case of the Nokia 8, the back plays host to two 13MP Carl Zeiss lenses consisting of a color + monochrome setup that’s enhanced by 1.12µm pixels, 4K video recording, an aperture of f/2.0, OIS, PDAF, and dual-LED flash. There’s a 13MP snapper on the flip side as well, boasting of the same 1.12µm pixels, f/2.0 aperture, and PDAF.

A lot of phones have dual cameras these days, which means the Nokia 8 needs something unique to set it apart from the others. The company’s betting on its own OZO spatial 360-degree audio technology to do so. The tool utilizes 3 microphones to capture surround sound, making the audio more immersive than most smartphone recordings.

Specifications of the Nokia 8:

The Nokia 8 will begin its global journey in September. It’s set to hit India in early October. Country-specific cost details are to be announced closer to the handset’s market launch.